Adam Dickinson on Our Metabolism

Our Metabolism: Poetry in the Anthropocene

The metabolism of our bodies is connected to the metabolism of the planet. We transform, reshape, or “write” our environment by polluting it, by changing nutrient flows and biogeochemical cycles. In response, our environment “writes” us through changed hormonal signals caused by endocrine disrupting chemicals or altered gut microbial communities induced by industrialized diets and lifestyles. Take for example the twin challenges of climate change and antibiotic resistance. Both crises are at once local and global, involving disruptive interventions into the metabolic circumstances of humans and nonhumans at microscopic and macroscopic levels. In the case of climate change, increasing greenhouse gas emissions have introduced a metabolic rift into the carbon cycle leading to the accumulation of carbon in the atmosphere, increasing global temperatures, and resulting in widespread ecosystem changes, enhanced thermoregulatory and psychological distress among vulnerable people, as well as social unrest. In the case of antibiotic resistance, overuse of antibiotics in therapeutic and agricultural activities (often the result of unequal pharmaceutical access around the world) has changed the microbial communities that inhabit our bodies and our environments, turning historically benign commensal species into potentially dangerous threats. If accumulating greenhouse gas emissions have altered our shared atmosphere, then the overuse of antibiotics has similarly altered the microbial communities that we all inescapably share.

My work is concerned with this complicated interplay between the “outside” and the “inside” and the writing that happens between and through the porous membrane that separates them. My book Anatomic (Coach House Books) was written in response to toxicological testing on my body and the sequencing of my microbiome. As I discovered, the Anthropocene and its global forces are legible in the local circulation of my bodily fluids. I found phthalates (from plastics and other consumer products), PCBs, flame retardants, insecticides, heavy metals, and other environmental contaminants in my blood and urine. My microbiome revealed antibiotic resistance genes and bacteria associated with a Western diet high in sugar and fat, along with other species that correspond with lower levels of inflammation. My aim was to incorporate these test results in Anatomic and formally and thematically respond to how the “outside” writes the “inside” in toxic ways, in the case of chemical pollution, but also in necessary ways, in the case of the significant role that bacteria play in human health (bacteria regulate the immune system, physiological developments, and important aspects of psychological health among other influences).

The poem “Agents Orange, Yellow, and Red” from Anatomic was written in response to discovering the dioxin 2,3,7,8-Tetrachlorodibenzodioxin in my blood. Dioxins are a class of persistent organic pollutants, which means they are not easily broken down in the environment. As a result, they biomagnify through the food chain. There is a good chance anyone reading this has measurable amounts in their own blood. Dioxins have an interesting industrial, cultural, and political history. 2,3,7,8-Tetrachlorodibenzodioxin, for example, is a byproduct of industrial processes, such as the chlorine bleaching of pulp and paper. It was also produced in the manufacture of some herbicides, including, famously, Agent Orange, which was used as a defoliant in the Vietnam War and led to a legacy of health problems. This chemical is also believed to be the poison covertly administered in the attempted assassination of Viktor Yushchenko in 2004 during the Orange Revolution in Ukraine, an anti-corruption and anti-cronyism movement against Russian influence. The toxicity of these chemicals stems from their capacity to interfere with the endocrine system, the system of hormonal communication in the body that regulates processes associated with the reproductive system, the nervous system, and metabolism more generally (I think of the endocrine system as a kind of poetics). My poem responds to dioxin in part by reflecting on the complex history of the chemical as well as my own potential exposure history. I spent a significant portion of my life living and traveling in central and northern Ontario, Canada, never far from pulp and paper mills and their distinctive sulfurous smell and insidious environmental footprint.

My writing in general, an exploration of what I call “metabolic poetics,” continues to interweave treatments of local and global metabolism, implicitly proposing that renovated approaches to environmental and social problems in the Anthropocene are enlivened by thinking and writing immersively within their biological, cultural, and historical contexts. Through ongoing laboratory experiments (variously involving heat stress, my own microbes, and electrodermal activity) leading to compositional procedures, my recent poems make visible the problems of climate change, antibiotic resistance, microplastic pollution, and sound pollution, among other concerns as they are legible in a human body (my body) and in the larger context of biological, social, and political activities. Shifting between microscopic and macroscopic scales, between the personal and the global, and between procedural and thematic compositional methods, my poems continue to emerge from experimental protocols, research, and resulting data associated with various unconventional yet rigorously scientific laboratory experiments.

A Foray into the Worlds of Animals and Humans. Jakob Von Uexküll. Minneapolis: University of Minnesota Press, 2010.

Dickinson writes: “Dioxins are a class of persistent organic pollutants, which means they are not easily broken down in the environment. As a result, they biomagnify through the food chain. There is a good chance anyone reading this has measurable amounts in their own blood.”

Look in your medicine cabinet and kitchen pantry. Compile a list of five industrial or chemical ingredients on the bottles and containers you pick up. Google the ingredients to discover their effects on the body, then incorporate the ingredient names into a poem.
— Poetry Daily 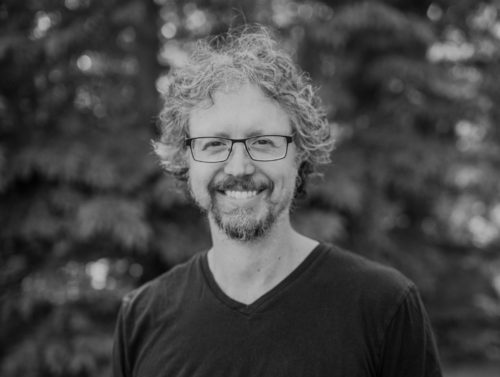 Adam Dickinson is the author of four books of poetry. His latest book, Anatomic (Coach House Books), which won the Alanna Bondar Memorial Book Prize from the Association for Literature, Environment, and Culture in Canada, involves the results of chemical and microbial testing on his body. His work has been nominated for major literary prizes in Canada including the Governor General’s Award for Poetry and the Trillium Book Award for Poetry, and has been translated into Chinese, Dutch, French, German, Norwegian, and Polish. He has been featured at international literary festivals in Canada, Europe, and the United States. Along with Claudia Rankine (USA) and Valzhyna Mort (Belarus), he was a member of the jury for the 2022 Griffin Poetry Prize. He teaches English and Creative Writing at Brock University in St. Catharines, Ontario, Canada.