“Salmon,” by Jorie Graham, is one of those poems, miracle-sharp in its vision, that came along at a vital moment and opened up my mind to contemporary poetry: before that, I’d basically only been reading poets who were no longer living, and I suppose I had liked that—the dramatic séance of it all; the sense, a touch thrilling, that only the dead could teach us to live.

But “Salmon” changed things—with its “light that is no longer light, no longer clarifies,” with its lovers spied through youthful eyes that see without having to know, lovers who become “two gold currents / wrapping round and round each other, fastening, unfastening”; it allowed me to see poetry not as a species gone extinct and capable of being revived, however rapturously, through memory alone, but as one that was continuing to survive, evolve, and outwit oblivion on its own; it made me, moreover, feel that I, too, might endure what was at hand, might travel in two directions—like the lovers, like the reader and the writer of a given poem, like the projected image returning to the eye, like the very lines of the poem, headed so far beyond themselves—instead of just one.

I was seventeen, I should mention, and struggling with an eating disorder that had reduced me to seventy-eight pounds. On leave from a ballet career I’d embarked on two years earlier, I found myself back at home with my family for the first extended period of time since my departure. But the world seemed to have thinned along with me, grown less and less fastened to itself, its disappearance its primary mode of expression, and home didn’t much alter this uncanny feeling. There was little use to such a life, I thought, though I didn’t know another way by then. To make matters worse, I’d come to believe dance was my first language, one that didn’t want me to speak it anymore. The vast vocabulary of it, having used me up, was migrating to better, younger bodies. At least that’s what it felt like at the time.

My older sister was also at home then. She was majoring in English and film studies at Willamette University—which is in our home state of Oregon (a state defined in no small part by the myth and meat of that grand old fish that can breathe in both river and ocean, that fights so hard to return to—and die in—the place of its origin). In need of distraction, I began shadow-reading everything my sister was assigned for school—The Sound and the Fury, The Lover, The Dispossessed, and The Dream of the Unified Field, in which I would find Jorie Graham’s “Salmon.” The adrenaline-sparking swiftness and also, in moments, utter stillness of that poem, the motion across time and space it offers the reader even as it runs up against images—of salmon leaping up falls, of the stream traveling into the eye which beholds it, of lovers reaching toward and through each other, then pressing themselves, exhausted, to a stone floor—suspended, seemingly, in undying animation, made me feel that the great lightning-momentum of our thoughts and feelings could be captured in language, and not just the language of gestures and tableaux with which dance inscribes the air, but language-as-it-is-figured-on-the-page, and that this new movement, mapped expertly on its pale square of desert, could actually make sense, actually translate the sensation of breathless impression-making and discovery and wondrous, reeling existence to another.

“Whatever shadow there was in that world
it was the one each cast
onto the other,
the thin black seam
they seemed to be trying to work away
between them. I held my breath.”

This was a language not so much spoken as felt from deep within … and it made me, all at once, begin to ask myself new questions: what are the choreographies by which our consciousness might move—the patterns in which astonishments congregate? Can the poet witness her own inception? What tempos might our impressions take up—only to shed them later on? And the silence pressing in on the poem as it presses in on each life’s beginning and end, how might these silences fill up with fruitful misunderstandings—which, of course, are also just understandings? How can the silences embracing a given line of poetry, that is, offer us permission to travel in many directions at once? “Between them. I held my breath.”

The salmon in the poem race against the current of a river, but also the current moment, which, captured and “helpless” as the eye perceiving it, has passed by the event it’s the very monument of—and we receive only the visual husk of the current, for the salmon run on the screen of a TV in a motel room, in Nebraska, “quick, glittering, past beauty, past / the importance of beauty.” It hadn’t occurred to me, at least not since I’d been a child, that anything, even something as wild as a salmon, could move beyond the importance of beauty. My whole existence was at that time subordinated to beauty, particularly as ballet had figured it. Every hour of the day I was ravenous and pretending not to be—all because of the importance of beauty. But there was a movement—thrilling, swift as light unburdened of any duty to illuminate, intent as any salmon on its loop of survival—beyond beauty now. And that was hope. A hope that led me to make off with my sister’s book after her course ended…

Years later, I would attend a reading of Jorie Graham’s in rural Vermont and ask her to read the poem “Salmon,” which she graciously did—breathing new life into those great leaps as she did so. And she would sign the page from which I first read “Salmon.” That same year, 2014, while bartending at a place called Pangaea, I would share “Salmon” with a hunter and fly fisherman who sat at the counter sharpening his muskrat-skinning knife. He hunched his shoulders over his Dark and Clammy and asked me, with tears in his eyes, to re-read the part about the still pool.

“How helpless
the still pool is,
upstream,
awaiting the gold blade
of their hurry.”

Though I didn’t ask for that knife, he left it for me “as a tip.” And though I recognized I had no apparent use for it, I knew I would take it with me.

Hold in mind a particular image or scene from your memory. Don’t write anything immediately, but just carry the image with you throughout the day, and try to connect it to other situations than the one in which you initially encountered it. Allow the image to be changed as it comes into relation with various environments and times, particulars and emotions. At the end of the day, try to write a poem in which you move through all the iterations of this image which you feel the most strongly about, and see where it takes you. Try, if you can, to move swiftly from one iteration to the next, unencumbering the poem of any superfluous scaffolding. 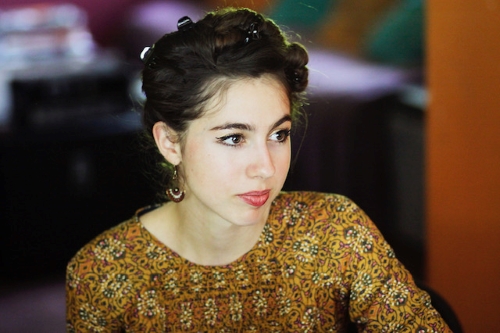 Devon Walker-Figueroa is the author of Philomath, selected for the 2020 National Poetry Series by Sally Keith. She grew up in Kings Valley, a ghost town in the Oregon Coast Range, and currently resides in Brooklyn. A graduate of Bennington College and the Iowa Writers’ Workshop, her writing has appeared in The Nation, POETRY, Poets & Writers, the American Poetry Review, Lana Turner, The Harvard Advocate, Ploughshares, Zyzzyva, and elsewhere. Devon is the recipient of the 2018 New England Review’s Emerging Writer Award; the 2021 Poetry Society of America’s Lucille Medwick Award; scholarships from the Rona Jaffe Foundation, Bread Loaf Writers’ Conference, The Community of Writers, and Bucknell University; and is the current Jill Davis Fellow in fiction at NYU, where she teaches undergraduate creative writing courses.