In the early Nineties, when I was enrolled in an undergraduate poetry workshop taught by James Thomas Stevens, I first encountered the luminous lines of Mei-mei Berssenbrugge. Stevens, who studied with Arthur Sze, is a member of the Akwesasne Mohawk Tribe and teaches at the American Indian Arts Institute in Santa Fe.

In his workshop, we read Empathy by Berssenbrugge, which I adored for its sustained flights in the abstract. I had questions. Are poets allowed to write long, breathless lines that touch the right margin of a page? Who gives us permission to write freely in the way we want to write? Shouldn’t we write about our liminal experiences in this manner? Empathy answered these questions with “yes” or “the poet herself.”

While wandering in a bookstore on a rainy day, I found a copy of one of Berssenbrugge’s earlier collections and carried it to the top floor of the sciences library, where I read it from cover to cover. This is my treasured, dog-eared copy of The Heat Bird, typeset by Keith and Rosmarie Waldrop for their beloved Burning Deck Press.

With this copy of The Heat Bird, I’d acquired a printed offset from the original letterpress edition. Today, as I hold it, it’s a slender volume, tall and wide as two postcards placed side by side, thin as a short stack of laundry quarters. It has a zany cover illustration in the shape of a sienna-colored hourglass.

To my unstudied eye, I thought the illustration looked like an abstract expressionist piece with a nod to Renaissance red chalk studies: an exquisite hybrid of the classic and the new. This was an etching by the painter Lee Sherry, a college classmate of Berssenburgge’s, who collaborated with the Brooklyn artist, Porfirio DiDonna, known for his Mondrian-meets-Kandinsky installations and spiritual aesthetic.

The poem I’ve chosen, “Farolita,” offers more than what initially meets the eye. “Farolita” is ostensibly about a Mobius strip, a continuous surface made by twisting a paper band once before joining the ends. It starts with a parallel sequence of imperatives (“Take…” and “turn” in line 1, “glue” in line 3). Next, it uses the second person in reference to a relationship (“you” in lines 4 and 5), and ends with a question, “Can it show some light through” (line 7)?

Take a strip of white paper, turn
the top of the strip in your right hand so
it faces the floor, then glue the ends together
If you go along on the outside, it seems
I am not connected to you. I’m trying
to think now if it has to be white paper
Can it show some light through?

As an undergraduate, I was delighted by the manner in which “Farolita” broke the rules of poetic convention. Prior to this workshop, I had rarely used the second person “you” in my writing because I was instructed not to do so. “Farolita” told the reader exactly what to do in a method similar to the origami-folding instructions I’d used as a girl; was such language fit for a poem? Punctuation was conspicuously missing at the end of each line, although present within the text of each. Finally, the poem raised a question at the end which might’ve been logically placed at the beginning.

In summary, I loved the cumulative effect of these oddities.

Today, as I re-read this poem, I enjoy the way it yields to light, as if the paper strip changes into a page, and the page of the poem into a farolita, or vice versa. In this way, it’s mostly about light without saying the word light more than once. It blurs the boundaries of thingness and mystery, obliquely pointing us to tangible and intangible realms of knowing. This verbal ricochet — a word which appears multiple times later in The Heat Bird — anchors a reader in the senses while playing in the abstract, pulsing a light beam through the axes of intimacy and indeterminacy.

Although seemingly direct in its prosaic description, the poem breaks rules in a subtle way, tinkering with readerly expectations by posing a question as it draws to a close. Beyond this inquiry are implicit ones about the nature of human warmth in our small interactions. How are we connected, you and I? What light shines through us? What about light that shines through the page of a poem, a farolita or farolito?

In my interview with Joni Molla at the Brooklyn-based arts and life magazine, HocTok, I shared about my experiences as a faculty mentor at Kundiman, the Asian American poetry retreat co-founded by Sarah Gambito and Joseph Legaspi. At Kundiman, I described our new and emerging Asian American voices are “hot lava” — molten igneous rock in flowing rivers of fire — shaping the landscape of contemporary American poetry in a figurative Pacific Ring of Fire and beyond.

At one of our gatherings, Kimiko Hahn had uttered the p-word or “permission,” i.e. how she’d learned to grant her own permission to write what she writes, in the way she writes. In other words, as poets, we must give ourselves permission to ______ (fill in the blank with whatever it is poets must do). Thanks to the fiery spaces of permission created by our forebears, new generations of poets dare to explore new poetic flights as heat birds.

Cathy Park Hong has said, “I hope that we give respect to an older generation of Asian American poets like Myung Mi Kim, John Yau, Marilyn Chin, who were writing when no one was giving Asians the time of day, poets who paved the way to the renaissance today.” Decades ago, in her seminal 1969 essay, “The Emergence of Yellow Power,” Amy Uyematsu writes: “The Yellow Power movement envisages a new role for Asian Americans. The shout of Yellow Power, symbolic of our new direction, is reverberating in the quiet corridors of the Asian community.”

Berssenbrugge’s lovely poem, “Farolita,” with slender brevity and splendid clarity, invites me into a luminous space of permission.

The word farolita refers to a small lantern in Spanish, while farolito refers to luminaria, the Christmas lanterns consisting of a candle or votive placed inside a paper bag with sand. Compose a poem that follows the motions of light emanating from a small source, animate or inanimate: a firefly, a reading lamp, a night light, or algae, for instance. In the poem, connect the source of light to a human relationship and explore the valences of this-that-or-the-other. How are we connected, you and I? What light shines through us? 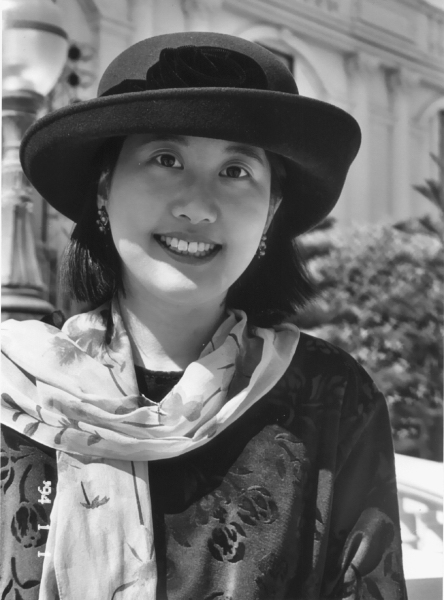 Karen An-hwei Lee is the author of Phyla of Joy (Tupelo 2012), Ardor (Tupelo 2008) and In Medias Res (Sarabande 2004), winner of the Norma Farber First Book Award. She authored two novels, Sonata in K (Ellipsis 2017) and The Maze of Transparencies (Ellipsis 2019). Lee’s translations of Li Qingzhao’s writing, Doubled Radiance: Poetry & Prose of Li Qingzhao, is the first volume in English to collect Li’s work in both genres (Singing Bone 2018). Currently, she serves in the administration at Point Loma Nazarene University. Lee also teaches in the low-residency MFA Program at Seattle Pacific University.