That is the great word the King James translators chose to be their mirror in God’s palindromic identity: I am that I am. It’s a monumental success of simplicity (like so much of that version indebted to William Tyndale). We hear both “I am that which I am” and, more archaically and more mysteriously, “I am because I am.” Not only do both of these capture so well the causal mystery of God’s existence, they exist even better side by side, as a pun on that. If you read the first sentence of this paragraph aloud, it sounds like I’ve begun by referring to nothing, forgetting my referent, and you’ve happened on this essay in the middle of it. What better and more alarming way to introduce God?

“Bees” from Susan Stewart’s Columbarium is exemplary of this issue by making a lyric of a non-lyric source in Book IV of Virgil’s Georgics. In other words, it’s exemplary for how it limits the range of the poem, inevitably, by being a lyric. I get into dangerous territory by saying the Georgics aren’t lyric (and by saying the word “lyric” at all), but I’m speaking of genre—of the contemporary “Wordsworthian” poem, written by a poet in tacit admission that they have written it, and are speaking.

Essentially, lyrics have a problem even before they start. Because the words we use are products of our experience, culture, and mannerisms, the poet must decide, by way of how they speak, what they, for the duration of the time, know, and how they’re cultured, what their mannerisms are. The central preoccupation facing all translators of old poetry is how to confront their own voice as the new voice of the work.

Susan Stewart is immensely removed from Virgil. So was John Dryden, who translated Virgil, who doesn’t rhyme, into rhyming couplets (defending that decision brilliantly in his preface by noting how the translator surrenders to their time). Because the sensibility represented by Virgil’s own language will forever be his and Roman, Stewart understands, like David Ferry or A.E. Stallings (also translators of Georgics), the translator’s responsibility for the brand new range the translation inhabits.

That is the word Stewart chooses to limit herself. That takes all the causal implications of “so,” “then,” “since” etc. and streamlines them into that one biblical word:

That the bees were born in the corpse of the injured animal.
That the bees came forth out of the corrupted flesh.

There is no referent for these “that”’s. Stewart, in making a lyric out of a narrative, didactic poem, freezes the incessant forward motion of Virgil’s instructions to a frozen moment of lyric. The lyric voice proceeds through time, of course, but the causality of the instructions (of first choosing the place for the dead bull, then beating it…) converges in “that.” If “that” means “because,” we can’t identify the cause, and how can we know when the actions of these two lines occurred? We have no way of discerning the timeline: the lines simply happen to come in a particular order in the lyric poem.

This changes, though. Stewart breaks out of the “voice from the wilderness” into Virgil’s instructional mode, though once again she consolidates time by mirroring the sentence structure and unparticularizing the succession of the acts. First, see how David Ferry translates Virgil’s instructions on when we should beat the animal to death:

This should be done when the zephyrs with their touch
Have just begun to quicken and stir the waves
And just before the meadows begin to blush
With their new color and just before the chattering
Swallow hangs her nest from the high house-rafters.

nest and the dew is warm and the days grow long.

“Around the end of March” seems to be the idea. Ferry preserves Virgil’s instructive habit, but Stewart, in her more rigorous stylization, having come from the ominous, unclear speaker of the opening, continues in doom-language less instructive than demanding.

But what if, as happens elsewhere in Virgil, a goofy shepherd comes along talking with his friend? Can Stewart’s voice admit that into its poem? Where is room for rustic comedy in a language of such imposing prophecy? It may seem obvious, but a lot lies in the fact that if we imagine the poem saying, suddenly, “howdy there,” it fails so spectacularly that any beauty the poem had crumbles, and we no longer “believe” it.

The limit of the voice of “Bees” is the parameter of its beauty. As in all perspectives, something is not seen. Actually, most things are not seen. The sense of beauty in anything is involved with what that sense excludes. The white walls of a museum perhaps do their best to be blank slates, prepared to present, without irony, anything at all, but even this has its artifice.

“Bees” is a wonderfully successful poem, as is the book Columbarium and indeed all of Cinder. I’ve pried into it a little because of its success, which is, as I’ve tried to show, tied directly to its “failure”—a “failure” in quotation marks because it is the failure to represent everything, and that’s like calling death a failure of life: the requirement is absurd, even if the sentence is true.

Carter highlights Stewart’s use of the word “that” to describe the process of an ox carcass producing bees. Choose a sentence structure, then describe a process of destruction or creation (or both) using that structure repetitively. The magic of the repetition should reflect the process described.
— Poetry Daily 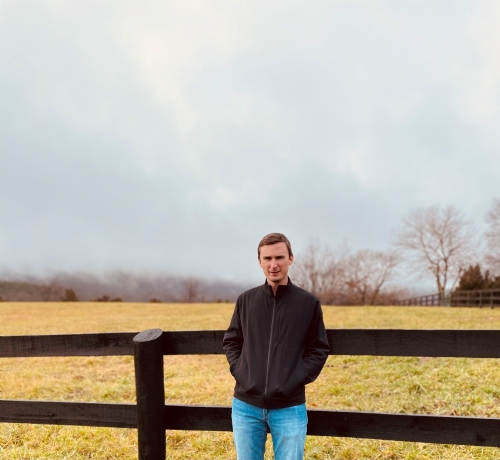 Keene Carter is from Charlottesville, Virginia. He is the production coordinator for Poetry Daily.