The smallest art foundation in the world is housed within a 34 x 40 x 75 cm dollhouse in a bright, white apartment overflowing with books belonging to editor and curator Javier Castro Flórez in Murcia, Spain. Founded in March 2014, Fundación Newcastle housed the first art exhibition I attended after moving to Murcia in September 2014. Desapariciones: imágenes del cuerpo en la colección Newcastle: no canvas was larger than a postcard, and work ranged from photography to line drawings, and video installations on an iPhone mini seamlessly mounted onto the dollhouse wall—one promotional photo shows the first-floor gallery space dominated by a tiny black kitten. I remember turning away from the brightly lit Fundación Newcastle as my name was called and saw Bea coming up the stairs. She had dark, short-cropped hair and wore a blazer as she’d just come from working at the art center Centro Puertas de Castilla. In 2014, she’d founded Ad minimum, a micro press publishing “obras en pequeño formato.”

The circumstances of our meeting and her micro press were perfect precursors for being introduced to her own poetry. Admiration for its mixture of restraint and imagistic wildness drew me to translating Bea’s debut collection, Oscura deja la piel su sombra (How Dark My Skin Is Left by Her Shadow), which was published in 2017 and composed of compact and expressive Sapphic fragments. Unabashedly sad and sensual, How Dark My Skin Is Left by Her Shadow is an evocative exploration of the lonely void left in the wake of a breakup. While it would be painfully reductive to call the collection a breakup book, my first few passes through its pages left me in awe of how Bea could concentrate these feelings of loss and desire into such compact poems, and the collection spans fewer than seven hundred words.

While I admired the volume’s bold economy of language, personal reasons pulled me to the collection. I’d left a girlfriend in Houston and our long-distance relationship became strained by the winter. Bea had a girlfriend in another city, albeit much closer, and we bonded over poetry and the trials of long-distance love. By the spring of 2015, both relationships had dissolved. While I threw myself into translation, Bea crafted thirty-one micro poems flowing together as one book-length poem. Within the collection, the speaker’s personal grief grows in a progression of tightly crafted pieces, and her loss is alive, “the darkness in us” is “stretching its body.”

By the time Oscura deja la piel su sombra was published, I lived in Alicante and attended its presentation at Librería Pynchon & Co. I proposed translation, and Bea signed my book, noting “la ilusión que pronto me lleves a Texas.” While she has yet to make the trip, I took the collection home to Texas and finished a draft out in Alpine, photographing the slim volume with its minimalist white cover and grid of 7 x 7 black dots at the Chihuahuan Desert Research Institute, balanced on a wickedly sharp agave cactus which drew blood.

An ALTA workshop with Boris Dralyuk in October 2021 provided indispensable feedback on early drafts of “how dark my skin is left by her shadow” and “come alone.” These poems open the third and final section, and as the first is the title poem, its phrasing loomed large. Spanish’s gendered articles and non-specific pronouns offered various possibilities for “la piel” and “su sombra.” For workshop, I sent these options:

As some poems are addressed to the lost love, I experimented with the second person, but as I was familiar with the relationship inspiring the work, I leaned towards a more specific “her,” and considered a non-specific “they.” Luckily, Bea preferred my suggestion of making it clear she’s speaking about a woman.

Questions overflowed these two brief poems; “ya conocí su hambre” had me shuttling between met with and encountered, and I eventually settled on to know for its double biblical meaning (elsewhere in the collection I’d branched out to “acquainted with,” recalling Frost), and the workshop helped me arrive at “it’s hunger I’d known so well.”

Bea has been described as “a poet of silence, of everything unsaid which is suggested through language,” and translating these poems opened my eyes to the immense possibilities of brevity, inspiring me to begin a book-length project in small bursts. How Dark My Skin Is Left by Her Shadow taught me the strength of distillation, how intensity rises, and pressure builds when a substance is compressed. While my own poems tended to range and unfold to fill the page, I’ve found myself drawn to paring back in order to find more intense, more concentrated feeling. In an interview, Bea describes “writing as a technology that intervenes on one’s body and transforms it, as a possible place for the reformulation of subjectivity and desire” and one poem claims “decir poco duele.” Here I have found muchness in extreme restraint.

Search for “Japan’s 72 Microseasons” and read about an alternative practice for counting days based on classical Chinese sources where “silkworms start feasting on mulberry leaves” (May 21–25) and “rotten grass becomes fireflies” (June 11–15). With local seasonal rhythms in mind, create a short poem or series of micro poems with an aim to connect feelings and memories inside the body with external environmental changes. Can any significant emotional event be tied to an element of shifting seasons? 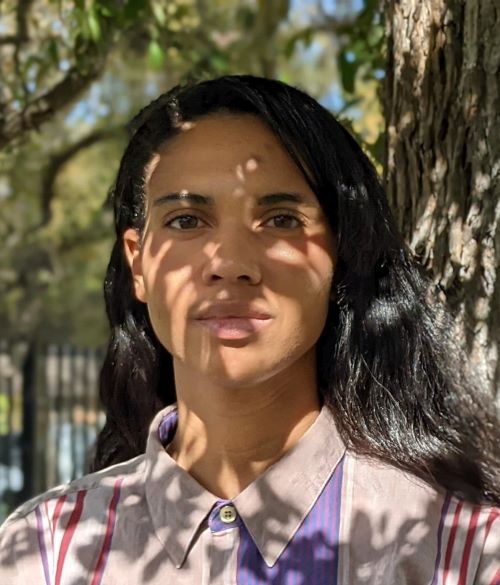 Layla Benitez-James is a 2022 NEA fellow in translation, a 2022/23 National Book Critics Circle Fellow, and the author of God Suspected My Heart Was a Geode, but He Had to Make Sure, selected by Major Jackson for Cave Canem’s 2017 Toi Derricotte & Cornelius Eady Chapbook Prize. As Director of Literary Outreach for the Unamuno Author Series in Madrid, she edited its poetry festival anthology, Desperate Literature. Poems and essays are published in or forthcoming in Poetry Magazine, Black Femme Collective, Virginia Quarterly Review, Latino Book Review, and Poetry London. Layla received an MFA in poetry from the University of Houston and has published reviews on Poetry Foundation’s Harriet Books.