Death is always the same, but each man dies in his own way.
—Carson McCullers

A month after my father passed away, and two weeks after I started taking testosterone, the first work I fully resumed were my translations of my grandfather Sotero Rivera Avilés’ poetry. It felt obvious and prosaic to start there, with the figure whose tangled masculinity had defined our family, through defiance, disidentification, or partial acceptance. My hope, since I undertook this work, has been to lean into my obsession with his life, and accept my desire to see myself, my queerness, and my transness in his failures to uphold cis masculinity.

Given how little time we spent together, I can only describe my memories of him as hauntings. It is through my uncles, my mother, my aunt, and especially my grandmother, Virginia, that I have patched together different versions of who he was. My grandmother describes a yellow house by a river in Humatas. My mother swears he slept on the floor. They argue, agree, then sit in the living room confused, neither one admitting they may have forgotten.

The poems themselves feel haunted: by the war, by his childhood, by friendships, travels, and girlfriends. In translating “Domingo sin iglesia/ Churchless Sunday,” I retrace his steps, from his artificial arm on the couch, to his backyard, to the window facing the street, and finally to the church that appears in memory. I retrace his movements, from the stillness of “an aimless shoe, / destroyed/ thrown in nights and rain” to “the priest and the old women/ that raise their rage and destroy pulpits.”

But my favorite gesture is his shift from commonplace artifice, which he often describes as a sort of welcome failure, to a divinity he saw as hypocritical. His artificial arm laughs because it “understands” modernity’s obsession with usefulness and goodness is doomed to ruin. It is this exhausted refusal—that of a veteran’s artificial arm—that stays with me in my recent grief.

If the poems are hauntings, then the translations are hauntings of hauntings. The Spanish filmmaker José Val del Omar, for Variaciones sobre una granada, would take innumerable photos of a pomegranate (in Spanish “granada,” like the city of his birth) with different lenses and filters. Sometimes he’d film a film and then take a photo. The effect was accumulative: a phenomenological pile-up. This was his way of looking for the unity he called God, the essence of the pomegranate. Perhaps, through my translations, I am driven by a similar impossibility: the desire to sense in other languages, through other filters, my grandfather’s poems, and layer them on top of each other until he feels present.

One verse in particular left me unsatisfied with my translation: “pasan bajo el calor de mi ventana” became “pass beneath my sweltry window.” “Sweltry” is a weighty word, and I imagine the nuns suffering under their frocks in the Caribbean heat, but “calor” remits to human warmth, even tenderness, those things—like the smell of used books and towels and the entangled scent of incense—that are of the flesh. “El calor de mi cuerpo” would translate as “my body’s heat,” and “el calor de mi ventana” makes the window itself a body between two bodies (a translator) or the trace of body between two worlds (a ghost).

Then there are stylistic details I haven’t quite found a way to bring into English: “en el patio de entonces,” has a musicality I aimed for with “what was once my yard.” “De entonces” is comparative. It implies a “back-then” versus “now” yard. Yet, “my back-then yard” sounds like something you could get at a hardware store, and lacks the nostalgic drift of the Spanish wording.

Still, I feel the translation begins in a way he would have loved. To the carelessness of “echado sin reparos,” I add the indeterminate adjective “some.” He did say “un mueble” not “algún mueble,” but in a small house can you really say “a couch” and not “the couch” without implying indeterminacy? It would be as strange as saying “a child” to the child who lives with you every day, sitting on the shared couch, playing on the brown tiled floor you sweep almost daily.

Watch fragments from Variaciones sobre una granada, buy a pomegranate, crush it in your hands. Imagine this crushing is only sound. Write. 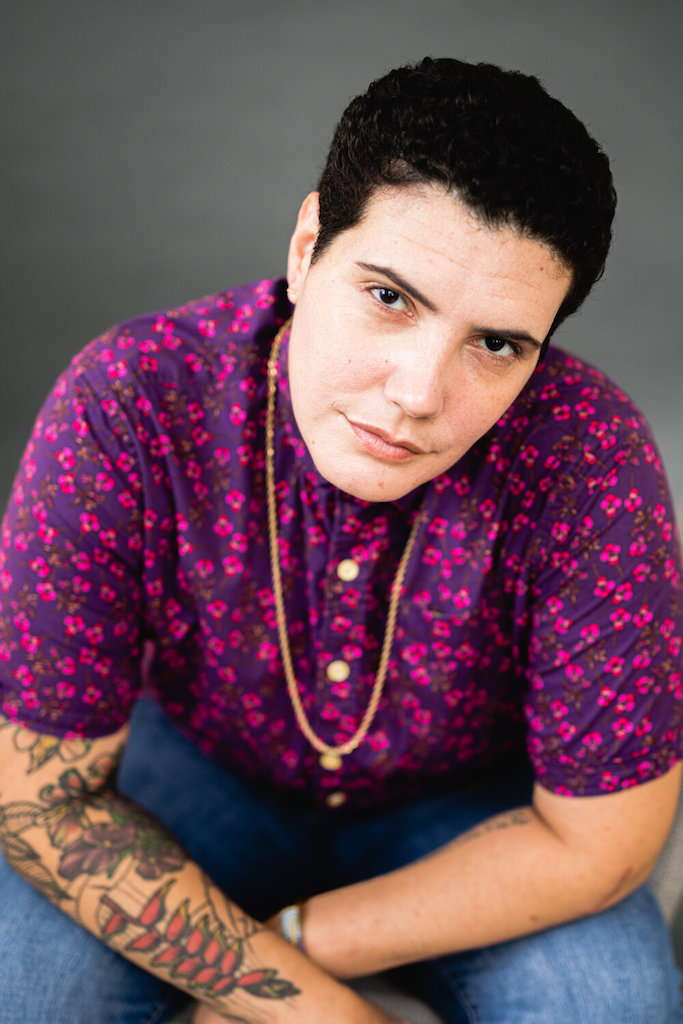 Raquel Salas Rivera (Mayagüez, 1985) is a Puerto Rican poet, translator, and editor. His honors include being named the 2018-19 Poet Laureate of Philadelphia and receiving the New Voices Award from Puerto Rico’s Festival de la Palabra. He is the author of five full-length poetry books. His third book, lo terciario/ the tertiary won the Lambda Literary Award for Transgender Poetry and was longlisted for the 2018 National Book Award. His fourth book, while they sleep (under the bed is another country), was longlisted for the 2020 Pen America Open Book Award and was a finalist for CLMP’s 2020 Firecracker Award. His fifth book, x/ex/exis won the inaugural Ambroggio Prize. antes que isla es volcán/before island is volcano, his sixth book, is an imaginative leap into Puerto Rico’s decolonial future and is forthcoming from Beacon Press in 2022. He has co-edited two anthologies. Puerto Rico en mi corazón is a bilingual anthology based on a special collection of handmade letterpress broadsides by contemporary Puerto Rican poets. La piel del arrecife is the first anthology of Puerto Rican trans poetry. He holds a Ph.D. in Comparative Literature and Literary Theory at the University of Pennsylvania and writes and teaches in Puerto Rico.