Chantal Neveu on the Ecology of Place

With Words, Bodies, in the Air, on the Earth

This essay was translated into English by Erín Moure. Read the original French text here.

Words grant me the experience of being alive on the Earth. Fully. In the air, with words. And in the interval between words. This enigma. Between inspiration and expiration, within this tiny interstice — this radiance. To experience here the void, the elements, the formation of words and bodies, water, blood, chlorophyll, photosynthesis, heartbeats, adjacency of words and bodies, quarks, stellar rustling, solar storms, snow, rhubarb, spring, air conditioning, monstera, visual and martial arts, earthly and societal revolutions. Co-presence and interactions. Animate and inanimate objects, rare earths, arable lands, my mother, languages, influences, anatomy, the tallness of corn, stair risers, cows, lilacs, tubes, sophistication of the idyll, intubation, civilizational terror, metastability, lucidity, mutuality.

The sounds this makes. Resonances. Infra, audible — or not. Other resonances. Organic, memorial, intergenerational, epidermal, tactile, visible, readable, intelligible — or not. Emotional, always. An economy. Poetry. An erotics. Earthly. Earthling.

Upstream of writing, as a child perplexed at reality, there was a question, reiterated. What came before? Before the Earth, before us, before the sky, before the Universe, before everything. A macroscopic, microscopic telescoping, infinite and unsatiated. Suspension. The immeasurable. Later, a first sketch of an answer. Provisional. Presocratic. I marvel. The word clinamen. Spontaneous infinitesimal wind, a breath imperceptible and intrinsic, allowing parallel atoms to deviate, approach, meet, hang on — or not. And when one take last enough time, something can happen, an event, a sequence — unexpected. This phenomenon, without precedent, makes possible so much. To persist. Vibrate. Move. Resist. Founder. Transform. Separate. Shine — or not. In the breath of words are sounds, sensations, thoughts, meanings, objects, actions, passions, questions — random, rendered, phrased, fractals, ellipses, textualities, poems. Arrangements, alloys, reflections, diffractions, new metamorphoses. So many inductions. To link, reread, write, unlink, translate, imagine, act — or not. Contemplative life. Motionless. Potential. Committed. Witness. Enacted. Vita activa. Mobile. Meet. Interact. Wait. Desire. Foresee. Hear. What is taking shape, what is taking place, what occurs, what is happening, what happens, what is coming, what might appear, be, become, be discerned. Channelling. It’s physical. Reversible — or not. Mediumistic.

To write, first to listen. The world, nature, individuals, humans — or not, birds, words, noise, lexicographic registers, electricity, the infinitive, biology of consciousness, corpus of knowledge, of craft, of profession. Faber. Fabrication. Makings. Language. To script what is said — or not. What is thought. What urges onward. Recopy words. Force of inertia. Foci of energy. Frequencies. Ensembles. Let the words, the syntagms repose. Save them. Forget them. Protect them. Speak them. Silence them. Move them — again. Choose them. Bring them into play. Bring them together. To attend practise anticipate hone. To be amazed.

To love. To let the self be penetrated. To take on, learn, understand — or not. Ingestion, metabolism, enrichment. Somatic, intellectual, relational, structural, circumstantial — ethical. To go forth together. With words, bodies, in the air, on the Earth — in friendship. With poets thinkers researchers walkers. Walking, conversing, reading each other’s work, receptive to each other, collaborating, caring, influencing each other, responding to each other. Topology of autonomies, complicities, languages, ways of life, decisions, attentions and intuitions. Pluridimensional dialogue. Studio, public square, fountain, lake, local, plateau, residence, gallery, library, balcony, bookstore, hospital, hotel, cottage, land, garden, terrace, waterfront, on the rocks, at the river, canal, storey, on the mountain, in the cemetery. At Epidaurus. Back to the studio — an ecology, dwelling place, listening post, belvedere, radio.

In the studio, words reflect, settle, take on weight or bare themselves, are displaced or displace, deliberately or at random, words open up. Immanence. Literal source, polysemic reservoir. Poem. Further surges of sound, of sense. Correspondences. Back and forth. Etymological, historical, oracular, extraordinarily visionary. Reversals of scales, values, time. Relays. Landmarks. Bearers. Progressions. Interactions. Words hold each other, and hold me with them. Words support each other, and give me support. Sustainability. Precisely, there where I move, where I am moved, where I breathe, where I take hold, standing, understanding — with words, everywhere. Alive.

Erín Moure is poet and translator who translates poetry from French, Galician, Portunhol, Portuguese, Spanish, and Ukrainian (with Roman Ivashkiv) into English. Her most recent works are a translation from Galician of Chus Pato’s latest book, The Face of the Quartzes (Veliz Books, 2021) and a chapbook, Retooling for a Figurative Life (Vallum, 2021). Her translation of Quebec poet Chantal Neveu’s This Radiant Life (Book*hug Press, 2020) was awarded the 2021 Governor General’s Literary Award for French to English translation. More at erinmoure.mystrikingly.com.

Neveu says, “To go forth together.” Write a poem in the choric mode, i.e. from the voice of a group rather than an individual.
— Poetry Daily 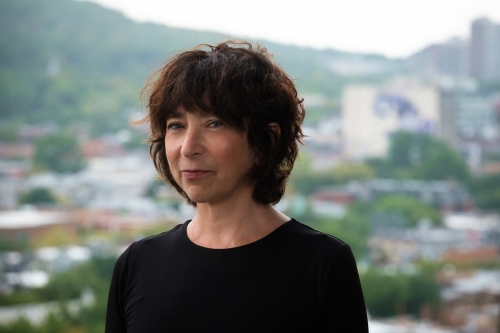 Chantal Neveu is a francophone writer from Québec, Canada. She is the author of six books of poetry: you, La vie radieuse, coït, mentale (La Peuplade), Une spectaculaire influence (l’Hexagone) et èdres (É=É), and has created numerous interdisciplinary literary works presented in Canada and abroad. Her books translated into English are all published by Book*hug Press : This Radiant Life by Erín Moure (Winner of the 2021 Governor General’s Literary Award for Translation, Winner of the 2021 Nelson Ball Prize), A Spectacular Influence by Nathanaël, and Coït by Angela Carr. Neveu lives in Montreal.