[am startled at times that the 1 whom I am]

Friederike Mayröcker
Translated from the German by Jonathan Larson

am startled at times that the 1 whom I amspeaking to is not there, yellow and red elongateleaflets from the robinia tree waft to the ground, thenthrough the side alley into the BÜRGER CAFÉ, reading withblossoms and clouds, o Jesus your blood who cansave me, covered with oaks and sparse pine-trees, thishasty goodbye you hurry to the car the stones of Sifnos withblue-green brows while the cut-flowers razor-sharp in the prairie, the rock-hard mnemotechnic, art of recalling,automatized reciting dressing and undressing reading, dripdab onto the asphalt or my gratingsteps. The kitchen window open wide my brainin the hollows of my knee, breathing heavy

Copyright © 2018 by Jonathan Larson
The Song Cave
All rights reserved.
Reproduced by Poetry Daily with permission. 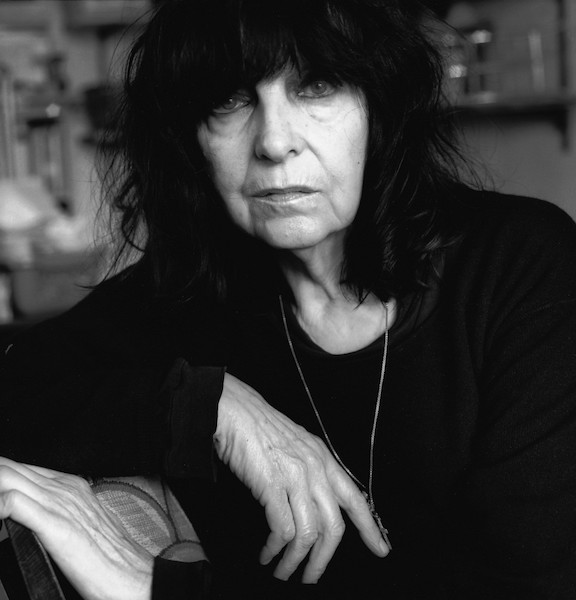 Born in Vienna, Austria in 1924, Friederike Mayröcker has written over 100 works of poetry and prose among children’s books, librettos, and radio plays. She is the recipient of countless prizes and awards, including the most important prize for German language literature, the Georg Büchner Prize. Mayröcker’s collections available in English translation include Night Train (1992, trans. Beth Bjorklund); Heiligenanstalt (1994, trans. Rosmarie Waldrop); with each clouded peak (1998, trans. Rosmarie Waldrop and Harriett Watts); peck me up, my wing (2000, trans. Mary Burns); Raving Language: Selected Poems 1946-2006 (2007, trans. Richard Dove); and brütt, or The Sighing Gardens (2008, trans. Roslyn Theobald); A Requiem for Ernst Jandl (2018, Roslyn Theobald); and Scardanelli (2018, Jonathan Larson). 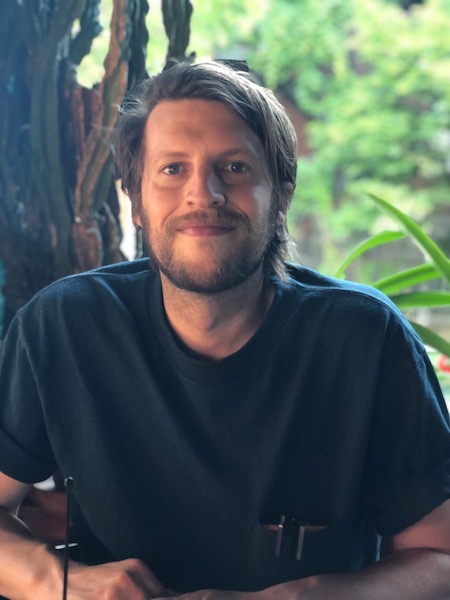 Jonathan Larson is a poet and translator living and working in Brooklyn. His translations of Friederike Mayröcker’s Scardanelli and Francis Ponge’s Nioque of the Early-Spring were published by The Song Cave. His translation of Friederike Mayröcker’s From Embracing the Sparrow-wall, or 1 Schumann-madness is forthcoming from OOMPH! Press later this summer. Recent work has appeared in or is forthcoming from The Believer, BOMB, The Brooklyn Rail, Lana Turner, and elsewhere. 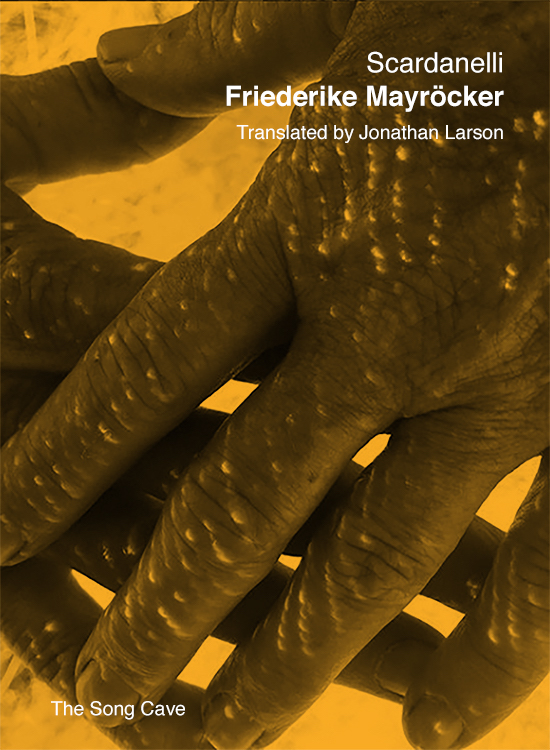 In Scardanelli, Friederike Mayröcker, one of the most well-known poets in Austria associated with the experimental German writers and artists of the Wiener Gruppe, continues to sharpen her mystical and hallucinatory poetic voice. Filled with memory and loss, these poems are time-stamped and often dedicated to the friends they address, including Friedrich Hölderlin--"I do often go in your shadow"--who appears in the first poem of the book and stays throughout. Even the title, Scardanelli, refers to the name that Hölderlin signed many of his poems with after having been diagnosed with madness toward the end of 1806. Mayröcker uses her own eclectic reading, daily life, and the scenes and sounds of Vienna around her to find a new language for grief and aging--"I am counted among the aging ones though I would prefer to consort with the young (rose of their cheeks)." Despite the intractable challenges Mayröcker’s layered language and unconventional use of signs and symbols presents to translation, Jonathan Larson manages to convey masterfully the unmistakable singularity of her work.

"Very consistently, in verse and prose, [Friederike Mayröcker] has combined collage procedures with fantasy and free association, relying on the imaginative power, elegance and inventiveness of her language alone to make up for the loss of referential coherence, linear plots in prose or ‘subjects’, as distinct from themes, in poems. Her combinations of the most disparate material have their being in total freedom."
—Michael Hamburger