I got news yesterdayfrom a friend of minethat all people against the war shouldsend a bag of rice to George Bush,& on the bag we should write,"If your enemies are hungry, feed them."But to be perfectly clear,my enemies are not hungry.They are not standing in linesfor food, or stretching rations,or waiting at the airportsto claim the piecesof the bodies of their dead.My enemies ride jets to parties.They are not tied up in pensin Guantanamo Bay. They are notyoung children throwing rocks. My enemies eatmeats & vegetables at tablesin white houses where candles blaze, castshadows of crosses, & flowers.They wear ball gowns & suits & ringsto talk of war in neat & folded languagesthat will not stain their formal dinner clothesor tousle their hair. They use words like "casualties"to speak of murder. They are not stripped down to skin& made to stand barefoot in the cold or hot.They do not lose their children to this war.They do not lose their houses & their streets. They do notcome home to find their lamps broken.They do not ever come home to find their families murderedor disappeared or guns put at their faces.Their children are not made to walka field of mines, exploding.This is no wedding.This is no feast.I will not send George Bush rice, worked for ricefrom my own kitchenwhere it sits in a glass jar & I am transfixedby the thousands of beautiful pieceslike a watcher at some homemade & dryaquarium of grains, while the radio calls outthe local names of 2,000US soldiers counted dead since March.&, we all know it, there will always be more thanwhat's been counted. They will not say the namesof an Iraqi family trying to pass a checkpointin an old white van. A teenager caught out on some roadafter curfew. The radio will go on, shoutingthe names &, I promise you,they will not call your name, HassnaAli Sabah, age 30, killed by a missile in Al-Bassra, or you,Ibrahim Al-Yussuf, or the sons of Sa'id Shahishon a farm outside of Baghdad, or Ibrahim, age 12,as if your blood were any less red, as if the skinsthat melted were any less skin, & the bonesthat broke were any less bone,as if your eradication were any less absolute, any lesseradication from this earth where you werenot a president or a military soldier.& you will not ever walk homeagain, or smell your mother's hair again,or shake the date palm treeor smell the seaor hear the people singing at your weddingor become oldor dream or breathe, or even pray or whistle,& your tongue will be all gone or useless& it will not ever say again or ask a question,you, who were birthed once, & given milk,& given names that mean: she is born at night,happy, favorite daughter,morning, heart, father ofa multitude.Your name, I will have noticedon a list collected by an Iraqi census of the dead,because your name is the name of my own brother,because your name is the Tigrinya word for "tomorrow,"because all my life I have wanted a farm,because my students are 12, because I rememberwhen my sisters were 12. & I will nothave ever seen your eyes, & you will nothave ever seen my eyesor the eyes of the ones who dropped the missiles,or the eyes of the ones who ordered the missiles,& the missiles have no eyes. You had no chance,the way they fell on avenues & farms& clocks & schoolchildren. There was no place for you& so you burned. A bag of rice will not bring you back.A poem cannot bring you. & although it is my promise hereto try to open every one of my windows, I cannotimagine the intimacy with whicha life leaves its body, even then,in detonation, when the skull is burst,& the body's country of indivisible organsflames into the everything. & even inthat quick departure as the life rushes on,headlong or backwards, there must, mustbe some singing as the hand waves "be well"to its other hand, goodbye;& the ear belongs to the field now.& we cannot separate the roof from the heartfrom the trees that were there, standing.& so it is, when I say "night,"it is your name I am calling,when I say "field,"your thousand, thousand names,your million names.

Copyright © 2007 by Aracelis Girmay
All rights reserved.
Reproduced by Poetry Daily with permission. 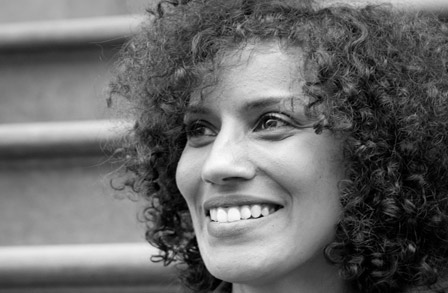 Aracelis Girmay, raised in southern California, is the inheritor of Eritrean, Puerto Rican, and African American traditions. A writer of poetry, essays, and fiction, her poems have appeared in numerous journals and magazines. She leads community workshops in New York and California. 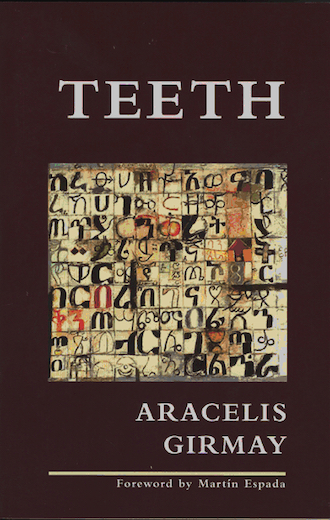 Stunning, highly original poems that celebrate the richness of the author's multicultural tradition, Teeth explores loves, wars, wild hope, defiance, and the spirit of creativity in a daring use of language and syntax. Behind this language one senses a powerful, inventive woman who is not afraid to tackle any subject, including rape, genocide, and love, always sustained by an optimistic voice, assuring us that in the end justice will triumph and love will persevere.

"Teeth delivers on its promise to be a fierce, proud book of poems."
—El Paso Times

"Her keen observations are put forth with an appetite for life without fear or self-consciousness."
—Nicholasa Mohr