He died & lamplight
that night brought out against fog its grid of gambits,

after that, anything outside
all scumble : marine layer a low hover

that suffered dwelling to disappear into weather, façade
a slow fade into gradient :

his death felt like that :
to unlock & open the front door onto a lost element

looking for purchase, to find a vanishing inside
a home where once there’d been rooms

& no humus
into which to inter his memory, no image :

from fifty miles away, a thousand feet below the field I love,
I tried to remember

how spring undoes the year like a knot :
how winter hay’s flat thin cover turns gold,

gray beneath rain, keeps close to ground
the germinal heat :

how grasses thread up through
the remainder of what sowed them

& help break it down : all spring following his death
I turned in thought to pale green

stems infiltrating the annual
weave of leavings, each seed a knot in the energy net

flung out over the field
so the caught space can blossom :

June 4th I board the ferry in time to see spring end
on Atlas Peak, grasses turning again to seed :

each stem an eidolon of itself, brittle
inflorescences shattering

in my wake, I leave the cabin
each afternoon for the field’s edge

to sit & watch what I can’t see
work the surface : wind, which I’ve never cared for

in particular, cares only for
particulars : this rachis, this spikelet, these lodicules,

beneath my feet a pile of gold seeds that rattles the dust :
after fourteen years of living with HIV & the side effects of protease inhibitors,

after persistent, misdiagnosed abdominal pain
turned out to be colon cancer that’d spread to his liver,

after the removal of the tumor & the majority of his colon,
after chemotherapy’s nausea & neuropathy,

after “a perforated abdomen led to a heart attack”
following “three surgeries, and a seizure after the second surgery,”

after “severe peritonitis
and a very bad case of blood poisoning”

that almost killed him,
Reginald died, his final letter

to me ending as always,
“Take good care my friend” : a gesture

I leave the field to hike up the trail
thick with wildflowers : less vetch this year, but plenty of mariposa lilies,

but others older, each branch ending in a bright ball of spikes
soon to bloom : yellow star thistle,

each year the thistle spreads farther down trail :
each year each plant bears

one to a thousand seed heads,
each seed head holding as many as eighty seeds, the life of one plant

easily leaving one hundred behind : knowing nothing I do will help
I pull up a hundred young plants

each time I pass the first field of them :
I grip each stem low to ensure I get

the long ingenious taproot
that even during drought reaches water

& my forearms blister where they’re pricked by lateral spines :
it might be bad mourning

to want the thistle gone
but I go on hating it :

it seems an uncanny design
ensures its slow destruction of an ecosystem :

it chokes out healthy grassland flora, even kills grazing animals
that might control its spread :

uncanny it survives drought & thrives
off wildfire both :

just a pretty plant holistic in its grip of a habitat,
the thistle is not metaphor

& extends into the future
as far as I can see, easily filling the field I love :

at its edge I stand, my skin
a stipple of blisters :

Something startles me where I thought I was safest…
Whitman says,

Now I am terrified
at the Earth, it is that calm and patient

as it undoes itself, undoing that toughens
to give way relentlessly to nothing

is what terrifies me as after the hike
I try with salve to soothe the blisters that deepen & weep weird clear fluid :

the day before Reginald died, we spoke on the phone
but morphine filled his speech

so completely
it was terrible to listen to him, disappearing

even as he said I love you & I echoed him, the last thing
I could bear

before I had to say goodbye
filled with the certainty I’d failed to witness the death of a friend I’d loved :

good mourning accepts transience, sure :
it makes sense in the field I love

where I see next year already
on the stem : sun draws inflorescences taut

& wind separates what’s left into seed & chaff : but
I was raised to believe in

a personal God attending a death
whose final horizon is eternity, an ideal persistent

as the star thistle seeds carried to California by contaminated feed in the 1850s,
whose progeny covers twelve to fifteen million acres currently :

what chemistry!
as Whitman would say

it is that calm and patient :
& though the thistle isn’t metaphor

I find myself kneeling,
weeding the lowest field again, & I become everything

about root giving up ground, the groan it grudges as it eases up, out,
the subtle scent of the flower

two weeks before we spoke, Reginald in the hospital wrote his last poem,
“God-With-Us,” ending it

it’s one thing to want to believe, to live by building a mind on the fault
between faith & doubt :

it’s another to believe the longing for belief
an attack, a distrust of immersion in the material given us as habit & habitat,

no possible rush of friendship for stones, grasses & humus,
as if the human were over

& the wild deer in us were released at last
at dusk to disappear into the stand of manzanita far across the field I love :

if we die to become nothing but matter so that Being itself might continue, grounded
by ground itself,

such a sweet thing out of such corruptions!,
who wouldn’t wish to linger in the material world

that won’t spare me or let me hold a living hand to him :
all spring I’ll return

to bring grief to the field, always
one root

so below” :
from star down to thistle

it’s all the same : still firm in the ground,
today it breaks in my hand,

bad mourning that this summer flowers
the life only destruction makes possible. 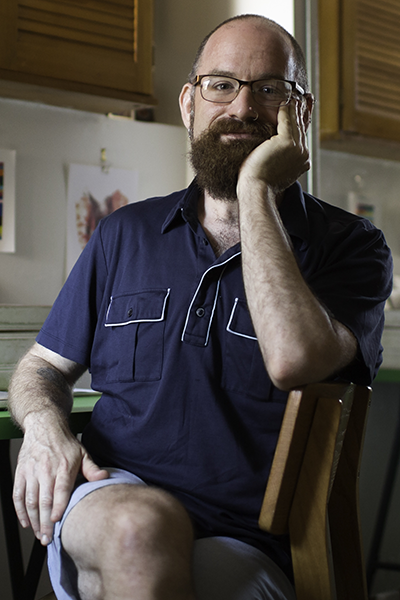 A 2020 Guggenheim Fellow, Brian Teare is the author of six critically acclaimed books, including Companion Grasses, a finalist for the Kingsley Tufts Award, and The Empty Form Goes All the Way to Heaven. His most recent book, Doomstead Days, was longlisted for the 2019 National Book Award and a finalist for the National Book Critics Circle, Kingsley Tufts, and Lambda Literary Awards. His honors include the Four Quartets Prize, Lambda Literary and Publishing Triangle Awards, and fellowships from the NEA, the Pew Center for Arts and Heritage, the American Antiquarian Society, the Headlands Center for the Arts, the Vermont Studio Center, and the MacDowell Colony. After over a decade of teaching and writing in the San Francisco Bay Area, and eight years in Philadelphia, he’s now an Associate Professor at the University of Virginia, and lives in Charlottesville, where he makes books by hand for his micropress, Albion Books. 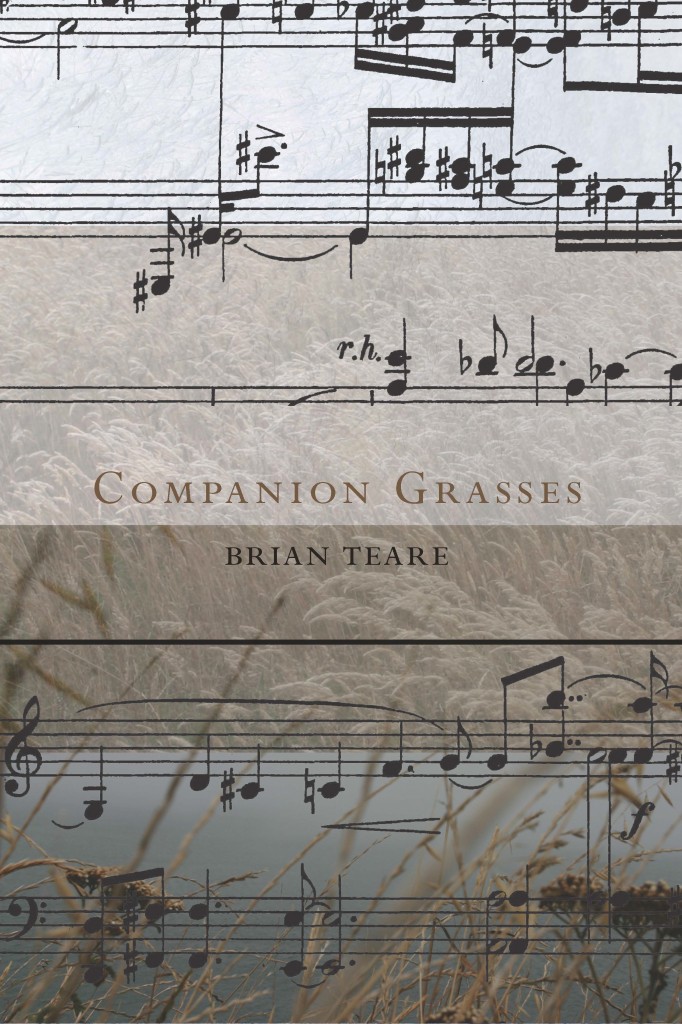 One of Slate‘s Best Poetry Books of 2013

"It is a love poem to California. And it is an elegy to an unnamed woman dead on the stoop, to Teare’s father, to the poet Reginald Shepherd. It is also one of the most beautiful and moving books that I’ve read. Full of seriousness. Full of tradition. And full of care."
—Juliana Spahr, author of Well Then There Now

"American poetics has never strayed far from a vigilant entwined apprehension, where a meticulous naming or reading of the world’s phenomena becomes an intelligence of the world’s immanent possibilities. From Emerson, Whitman and Dickinson on, the rigors of observation have laid claim to the spirit’s desire to find transcendence in the saturated repository of language. Brian Teare’s Companion Grasses is a glorious, daring continuance: 'I was making language/a stem to aspire to.'"
—Ann Lauterbach, author of Or To Begin Again