When we asked Poetry Daily Editorial Board Member Ilya Kaminsky to write about a book that was important to him in 2021 for our “Books We’ve Loved” series, he replied he couldn’t pick just one. Below is the first installment of Ilya Kaminsky’s notes on some of the many books he’s loved in the past year. (Read the second installment here.)

“I am only concerned with submersion in the fabulous,” says Will Alexander in Refractive Africa, a book of diasporic dreams and nightmares that creates its own music and myth. This is not your 107th reiteration of a typical USA confessional poem: complex, intricate, global in its vision, aware of tragedy and able to make, despite it all, “a ballet of the forgotten.” Will Alexander is a true Modernist among us.

Derrick Austin‘s Tenderness is filled with lyric poems that can be playful, inventive, and also filled to the brim with human emotion. He is a metaphysical poet as much as he is a poet of right now, of 2021, of this moment, this world. Austin is able to make a fable out of it all. Take, for instance, these lines from his beautiful poem, “Little Epic” — “The capital is already underwater, the inside / of a sea god’s throat, or maybe, his liver. / There’s a boy in a rowboat. The only / survivor, lets say. Moonlight, starts, a good wind. / Black Aenaes without a father on his back. / Already the boy is a failure. His name / is Lyric. Emancipation unsettles him. / Who said liberty was a field of lavender / studded with bees? Who said it wasn’t a sea? / Risk and Refusal, these will be the twins / that guide toward no empire. / Let there be a kind of Carthage for the boy / illuminated by fires not of grief and betrayal.”

I know I am reading a Sandra Beasley poem when precision and music are driven by emotive forces. “Ruth Bader Ginsburg sits in the nineteenth row of my heart,” writes Beasley in what, in the end, becomes a book of reckoning. Beasley questions the late empire, yes, but perhaps more importantly, more honestly, she questions herself. Which is why, I think, Made to Explode is a book one should read in this time. 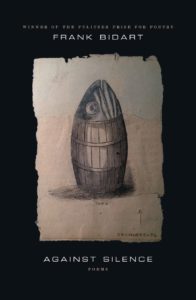 In Against Silence, as often in his oeuvre, Frank Bidart gives us a poetics where ethics and sensuality clash and a strange, terrifying awareness of what our species stands for is revealed: “Last night after midnight, or would that be today? unable to sleep, / I watched movies to remind myself / about our nature.” I recommend you start reading this book with the last poem, which is one of the most memorable new poems I have read this year.

Victoria Chang‘s Dear Memory is a poet’s stand against history while also giving us an attentive, delicate tapestry of shaping memories out of fragments and absences, a choral song out of many half-silenced voices. A collage of lyric fragment, prose letters and photographs, this hybrid memoir takes us on a personal, honest journey to speak about tragedy and its many aftermaths. A book of migration and loss, made with intimate intensities, silences, tendernesses.

Jerzy Ficowski is perhaps best known for saving Bruno Schulz’s legacy for us. The fact that he is also a great Polish poet in his own right is relatively unknown in the US. But Everything I Don’t Know changes that. Jennifer Grotz and Piotr Sommer’s translations are a masterwork of clarity and precision: “I was unable to save / a single life // I couldn’t stop / a single bullet // so I circle cemeteries / that aren’t there / I search for words / that aren’t there / I run // to the aid uncalled for / to the rescue delayed // I want to get there on time / even if it’s already over.” 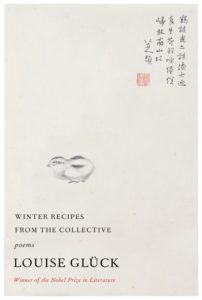 “And the world goes by,” says Louise Glück in her new book, Winter Recipes from the Collective, “and the world goes by, / all the world, each more beautiful than the last; / I touch your cheek to protect you—.” There is both tenderness and cruelty in this knowledge, a kind of integrity of tone that we come to recognize in Glück’s poems, a tone that goes hand in hand with her sparse language. But is it really sparse, this language? As you read on, you realize there is a strict formalism to Glück’s clarity, a durable poetics of exclusion: much is said here by what she does not say. But it’s tenderness one keeps coming back for.

Donika Kelly‘s The Renunciations is a powerful book that is rooted both in the vocabulary of the body and that of memory. At times it feels as if the speaker holds the book as a kind of protective talisman, as private terrors of her past and her present flash by. At other times, it feels as if the book is a boat which the speaker charts through troubled rivers. It is a very well-structured collection, rich both in its narrative and in its lushness of language; for example, in lines such as these: “Came the thaw, came the melting snowpack, the flooded river, / new groundwater, the well risen. I stood in the mud field / and called it a pasture. Stood with a needle in my mouth / and called it a song.”

“sometimes i want to ask the earth, / was it beautiful here / without us,” writes Shayla Lawz in this virtuoso debut performance. Innovative, urgent, speculation, n. is more than just a collection of poems. It is a kind of a concerto that portrays what it means to live and sing in America today: “i’ve been seeing my body around // in the stairwell, in the house / and even at times in the mirror. in the news.” 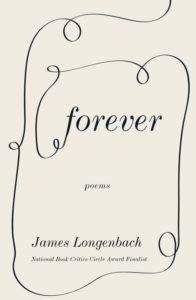 Forever by James Longenbach is a lyric excavation of time—what does it mean to be a voice in time, what does it mean to live in this changing body, it asks? Tenderness is the word that comes to mind as I want to describe this book. And, yet it is a book of endless loss. Perhaps this is because Longenbach knows that in time everything will be devastated, because of us, or in spite of us, and so he chooses tenderness as he looks at time and through it. And with this tenderness, wisdom comes: “The person I once was found himself / in the present, which was the only place he could be. / The dog that yesterday had barked / at his empty dish barked again. The stars were still shining.”

Mihaela Moscaliuc should be far better known. An immigrant from Romania, she writes with precision and nuance. Cemetery Ink is a terrific book. In one poem, we watch goats climb a tree, as Moscaliuc asks: “Haven’t you too wished yourself a goat / perched punch-drunk on a linden tree, / blasé about the gold you might shit, / how it might serve both hunger and greed. / Haven’t you goaded yourself / to balance just a bit longer, / chew on some fugitive scents, / forget what a ditch the earth is.” Isn’t this just terrific? It will do all of us poets some good, once in a while, to forget what a ditch this earth is and climb the trees like these goats.

Tracy K. Smith‘s Such Color: New and Selected gives us a generous offering, a perspective on this wonderful poet’s growth: meditations and narratives, lyric songs and civic poems. Smith’s mind takes us on curious journey, as she proposes: “It is true that death resists the present tense. / But memory does death one better. Ignores the future.” Somewhere by the middle of this book I realized that despite all her range and various interests, Smith’s work has an impressive unity. More than merely thematic, this unity is organic: the work is unified by how Smith’s mind moves, for she is a philosopher-poet. “What is the soul allowed to keep? / We saw to the edge of all there is — / So brutal and alive it seemed to comprehend us back”

There is generosity in Fernando Valverde‘s voice, a largesse of a Whitmanic kind, but there are no illusions as this Spanish poet travels the US observing this “thirst. / The thirst of America,” visiting the sites of American mass shootings. What else does he see? “I watch the prodigy of the birds / a child observes them from Camden / points to the sky / while listening to the vertigo of ambulances.” And yet there is something uplifting even in elegiac moments: “He does not close his eyes / he wants to remember her with his eyes open.” Carolyn Forché’s translation of America shines with clarity and precision. 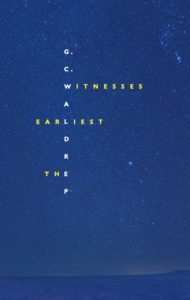 I have read G.C. Waldrep‘s poetry for years, and I think he should be far better known. There is playful-yet-serious examination of the species in his lines: “the rest of a man is a small breath, just enough / to touch that music / as every music must pass through the animal eye.” The danger of devotional poetics is that over time such poets forget they are poets and begin to pontificate. But The Earliest Witnesses proposes a different kind of devotional poetics. Here, the speaker doesn’t just appeal to something larger than one’s self, but also remembers that one lives among humans, and so there is wonderful humor, lightness, lyric play: “I have a fever and its name is God / The nurses come in shifts.”

Heartbreaking and melodious is C. Dale Young‘s Prometeo, a collection where elegies for friends, family members, and patients don’t overwhelm but try to understand what grief is. “I have written too many elegies,” the poet says, “the living have become jealous of the amount I have written for the dead.” In these pages music is emotive. “I was splendidly blended, genetically engineered / for survival,” he writes, and—I would add—for music.

Everyone says that we are in the best time for translation these days, but I wonder. I mean, how is it that we never had an anthology of poetry from Morocco until now? Poetic Justice: An Anthology of Contemporary Moroccan Poetry is the first such compilation in English. One learns a great deal from this multilingual anthology (including work written in Moroccan Arabic (darija), classical Arabic, French, and Tamazight). “Letters of time” the poet Driss Mesnaoui calls poems. Indeed. 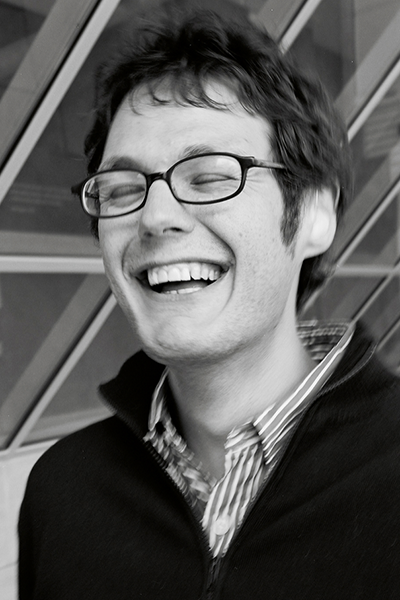 Ilya Kaminsky was born in the former Soviet Union and is now an American citizen. He is the author of the poetry collections Dancing in Odessa and Deaf Republic, and coeditor of The Ecco Anthology of International Poetry. He has received a Whiting Award, a Lannan Literary Fellowship, and a Guggenheim Fellowship, and was named a finalist for the Neustadt International Prize for Literature. His work has been translated into more than twenty languages.