The poems I know at 12 are nursery rhymes, “The Raven,” A.A. Milne, and Mad magazine parodies. I am flipping through a book my single-parent mother has been assigned at the local community college, where she takes classes to acquire an associate’s degree to land a job to feed us. The pages are Bible-thin. The title that catches my eye, “Eisenhower’s Visit to Franco, 1959,” reads like a headline or a social studies chapter. The poem does not sound like the poems I know, starting with the epigraph, which positions the reader in the elemental and the grave.

Though I did not know it then, and though I do not believe such knowledge critical to an appreciation of the poem, in keeping with the 20th-century American tendency to prefer fascist murderous despots to communist murderous despots, and as part of Cold War strategizing, in the late 1950s the U.S. reached a rapprochement with Spain, which included the installation of two U.S. military bases.

The first two lines, with their insistent, promised inevitability of “must triumph,” veer closely in tone to a government propaganda film while even at this late date still also sounding patriotically stirring. In the third line, the hero seems supernatural, a successful Icarus descending from above into the crepuscular murk of dusk.

The second stanza contains what struck me then as most revelatory (so much so I still recall the physical, spinal tingle when first reading it), the power of the line break revealing hidden, true intent:

“He promises all dark things
will be hunted down.”

I have been chasing that feeling in poems ever since.

From this public display, in the next stanza the poem moves to a catalog of hidden, even intimate, nocturnal images, the first of which evokes the banality of evil, followed by the great Spanish poet Machado, author of “He Anando Muchos Caminos,” on a journey I long read as mystical, though likely evocative of his dying in France as a refugee of the Spanish Civil War.

As I also did not know then, influenced by poets such as Machado, in the 1950s and 1960s Wright moved from formal to free verse rich in evocative, nearly Jungian touchstone imagery. (Incidentally, while the line “Wine darkens in stone jars in villages” may be so quintessentially Deep Image as to border on parody, as one of the style’s founders Wright is excused.)

The wine sleeping in the mouths of old men still makes my mouth pucker, and the grammar teacher-defying sentence splice delights the not-insignificant rule-breaker part of me. Surely the teeth of those old men are red and even blue with wine, starkly contrasted with the smiles mentioned in the next line. I trust I am not alone in hearing a flurry of camera clicks in “Smiles glitter in Madrid.”

In the last stanza the quo quickly follows the quid. In exchange for an almost delicate public display of friendship with a notorious right-wing dictator, American war machines are allowed on Spanish soil.

This poem, at once narrative, lyrical, and political, led me to more James Wright poems and to Spanish poets beyond Machado, particularly in the bilingual anthology Roots and Wings, which I discovered in my high school library along with the still-powerful Hayden Carruth anthology, The Voice That Is Great Within Us. From there followed a continuing lifetime of delight, bafflement, and discovery in poems.

Write about a historic public event and include images and details not reported publicly. 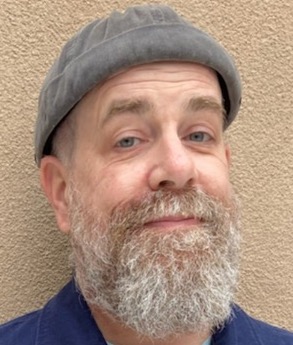 Aaron Anstett’s most recent collection, This Way to the Grand As-Is: New and Selected Poems, was a finalist for the 2021 Colorado Book Award. A new collection, Late-Stage Everything, will be published in 2022. Anstett lives in southern Colorado with his wife, Lesley.