I feel that every good poem is, to some extent, about poetry—or rather, is a defense of poetry. In justifying its own existence, simply by moving or provoking us, it justifies the existence of the art itself. Poems that are expressly about poetry, though, often leave me dissatisfied. Isn’t it better to show us what poetry and only poetry can do, rather than telling us? Even the great modern ars poeticas can sometimes feel too didactic (“A poem should not mean / But be”) or too affectedly droll (“I too, dislike it”).

The ones that continue to speak to me do so by using, with maximal artistry and economy, the traditional devices of poetry—namely, metaphor and delicate sound-patterning, including rhyme and meter, or at least rhythm. That, after all, is how poems take flight. One shining example, which makes full use of those devices, is Howard Nemerov’s “Because You Asked about the Line Between Prose and Poetry”:

Sparrows were feeding in a freezing drizzle
That while you watched turned to pieces of snow
Riding a gradient invisible
From silver aslant to random, white, and slow.

There came a moment that you couldn’t tell.
And then they clearly flew instead of fell.

“Verse,” by the Russophone American poet Julia Nemirovskaya (whose surname, it occurs to me, might share an origin with Nemerov’s in the town of Nemyriv, Ukraine), spoke to me straight away, as Julia’s poems always do. I’ve been translating her work for over a decade now, developing a vocabulary in English that isn’t quite mine and isn’t quite hers (how could it be, since she writes in Russian?) but is very much ours. What I recognized in “Verse” when I first read it were the characteristics I enumerated in my brief essay on Julia’s work for Asymptote: humility, a childlike originality of vision, and profound empathy. Here she extends her empathy to her art, personified as a singular muse—not Calliope with a tablet or Erato crowned with myrtle, but a “moon-white bull.”

Why bull? Perhaps because it is, symbolically, the most powerful of creatures. Though masculine, this one is as pale as the traditionally feminine moon—which Julia calls, in another poem, her “kin.” To the speaker, then, it is everything, yet it gives her almost nothing. The bull demands to be fed but will not feed its caretaker (“no milk”); nor will it offer gifts fit for a hero (“no golden fleece”). Nevertheless, the poor caretaker, donning her “only dress,” pretends that what awaits her is sustenance (“bread and butter”) and remuneration. All she really gets is a single nod of that big head—its nostrils flaring, its eyes intense. That is enough for the speaker, and it’s enough for me.

In Russian, the associative chain that leads to the final nod—that makes it sufficiently rewarding for the poet—is fortified, indeed justified, by a flexible yet recognizable rhythm and delightful rhymes, which bind “bread” (“хлеб”) to “animal stall/barn” (“хлев”), “bull” (“быка”) to “milk” (“молока”), “moon” (“луна”) to “fleece” (“руна”), and so on. Without these echoes, I feel, the vision would not cohere; it would seem merely eccentric, rather than strangely inevitable. In my English I relied on a similar rhythm and (often slant) rhymes to establish that sense of inevitability: “butter”/“byre,” “pays”/“dress,” “fields”/“fleece,” “graze”/“gaze,” “sod”/“nod,” and so on. How do I know when I’ve got a translation right? That unmistakable nod.

Write an ars poetica without mentioning poetry or the act of writing. 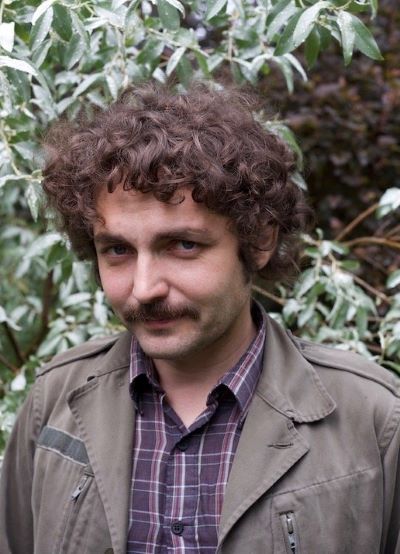 Boris Dralyuk is the Editor in Chief of the Los Angeles Review of Books. His poems have appeared or are forthcoming in The New York Review of Books, The Hopkins Review, The New Criterion, The Yale Review, First Things, Subtropics, The Georgia Review, and elsewhere. He is co-editor (with Robert Chandler and Irina Mashinski) of The Penguin Book of Russian Poetry, editor of 1917: Stories and Poems from the Russian Revolution and Ten Poems from Russia, and translator of Isaac Babel, Mikhail Zoshchenko, and other authors. He lives in Los Angeles. My Hollywood is his debut poetry collection.