Christine De Luca on Jidi Majia’s “The Enduring One”

In his invitation to translate some of Jidi Majia’s poems into a version of Scots, the poet-translator Gerry Loose described his request as ‘a bit left of field’—which it most certainly proved to be. Until that moment I had never heard of the Nuosu language of Sichuan, China, nor of its celebrated poet, Jidi Majia.

However I was immediately captivated not just by the poetry which seemed to sing, but also by the idea of a conversation between two minority tongues, albeit mediated through English. My own mother tongue is Shaetlan (Shetlandic) which, although still fairly widely spoken in the Shetland Islands, is an even more endangered language than Nuosu.

Gerry was able to provide a clear, elegant version in English, courtesy of Denis Mair. In circumstances when the translator has no access to the original language—and thus to subtleties of structure, rhyme, sound or rhythm, far less meaning—having a strong flexible English ‘bridge’ is a great asset. Denis Mair has a deep knowledge of Nuosu culture and language and not only did his English version feel totally reliable as well as elegant, his footnotes were invaluable when it came to understanding cultural allusions.

The other wonderful aspect of this project was that there would be a tri-lingual book: the Nuosu calligraphy is stunningly beautiful; there would be the English and, beyond that, a trio of Scots voices in that third version, adding different notes to the mix. Sheena Blackwell and Stuart Paterson were my fellow-translators.

I should perhaps add that Shaetlan is a version of Old Scots blended with remnants of Norn, the older Norse language of the northern isles of Scotland. Norn was spoken in Shetland well into the 18th century. Poet-translators from the Nordic countries have described Shaetlan as ‘a cousin language.’

Reading the poem I was given, ‘The Enduring One’, I sensed a flavour of the Old Testament books of Genesis and Proverbs, of Norse sagas, of the Finnish Origin stories as told in the Kalevala. There was the same sensual lyricism, the fabulous nature of the tales and the sheer urgency of telling. Also the sense of long kinship, the importance of genealogy and the need to remember, especially heroic forebears. I became ever more captivated by the poem. It has that spare beauty, possibly due to its role in what would have been a largely oral culture. Always I felt I was going back in time to a similar dependence on such means of language transmission.

One question I was unsure about was the translation of the word ‘you’. Although the safest bet was to leave it as ‘you,’ both Chinese and Shaetlan have more than one pronoun for ‘you.’ The latter has du/dee/dy/dine for the singular ‘you’ (if familiar and/or informal) but also uses ‘you’ for more formal, singular as well as plural and that generalised sense of ‘one.’ I could see places where one seemed more appropriate than the other, and Gerry suggested I just go with my intuitive sense of what seemed more appropriate. The intimacy afforded by ‘du’ as compared to ‘you’ is always a joy to use.

Sometimes when translating into Shaetlan, the relatively limited vocabulary available can be a problem, and one has to revert to the English word. However, sometimes we have a different but parallel concept, as in the second line of the Prologue or Proem:

By day I return to the soil of my tribe.

‘Calf-grund’ is the area where one was born and bred; it suggests a deep sense of ‘home’. By adding ‘wir ain’ (our own) is becomes inclusive rather than exclusive.

Sometimes, so as not to lose the ‘melody’ of the original, word order can be manipulated as in stanza 5:

A crack suddenly appeared
In the storied sword that hung on the wall.

Or, in the next two lines of stanza 5, when a dearth of abstract nouns available confounds,

The bimo says he can divide bane and blessing,
But not the workings of impermanence.
(bimo -hereditary priest)

the workings of impermanence was rendered as whit aye jöst wavvels, where ‘wavvels’ suggests movement, somewhat back and fore.

Can you write a poem with an ancestry theme, perhaps telling part of your family history or a surprising episode in that history for later generations to savour?

To make it feel immediate, you could perhaps have the voice of the forebear(s) as ‘I’ or, more tangentially, as ‘he’/’she’/’they’. Or you could write it as a conversation between you and a long-dead ancestor, perhaps in a call and response format like an antiphon.

If that’s difficult, you could invent an ‘interesting’ forebear! Wouldn’t they love to know how life has worked out for their family? 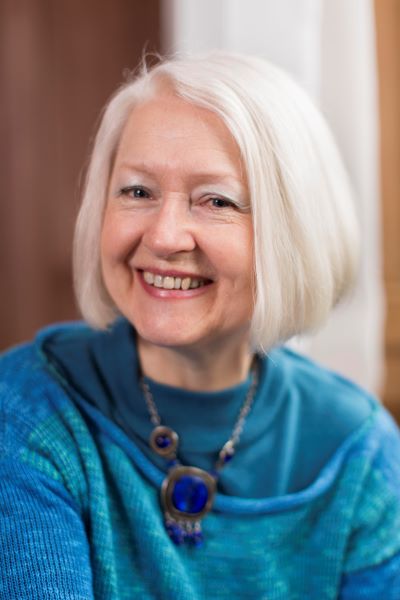 Christine De Luca was born and brought up in Shetland, Scotland and writes in both English and Shaetlan (Shetlandic). To date, she has had eight poetry collections published, several winning or shortlisted for awards. Her most recent collection is Veeve (Mariscat Press, Edinburgh, 2021). Beyond that her poems have been an integral part of several collaborations, most recently Paolozzi at Large in Edinburgh (Luath Press, Edinburgh, 2018) and — with the artist Victoria Crowe — Another Time, Another Place (Scottish Gallery, Edinburgh 2021). Currently she is collaborating with the artist Brigid Collins. Over the years she has won several awards for her poetry and her work also appears in many anthologies as well as The Poetry Archive. She has been active in translation projects, particularly with Nordic poets, and five bi-lingual collections of her poems have been published — French, Italian, Icelandic, Norwegian and English. Her Shaetlan version of Le Petit Prince has just been published by edition tintenfass, Germany. In 2014 she was invited to become the Edinburgh Makar (laureate), a role she held until 2017. She is also a member of the Edinburgh-based Shore Poets, a group which organises monthly poetry and music events in the city. Christine is also a founding member of Hansel Cooperative Press which publishes work created in Orkney and Shetland, often involving artists. She also enjoys collaborating with musicians, most notably with composer and jazz saxophonist Tommy Smith, and her words have frequently been set to music. Her second novel The Trials of Mary Johnsdaughter has recently been published by Luath Press (Edinburgh) 2022.