Moheb Soliman on “On the water”

On Water, and On the water

What brought you here? Do you like to read poems? You like to write, that’s it. Do you like—what do you call it? The environment? Nature? Ecology, biology, geology, zoology and other natural sciences? Just wilderness? The great outdoors. You like, “the non-human living world.” Secretly, you like nature. Capitalized. You hike. But more than that, more and more, you take long drives, past the suburbs, you stop in on parks, you Avoid ☑ Highways. Your trips involve camping. Your camping involves scribbling. Is that what brought you here? To this high point? A book of travel-written nature poetry? Ecopoetry? This is why you are here.

But is this on-the-water poem even either? Does it stand alone as such? Or does it need the entire book of poems that come before it and inform it, to be ecopoetic? It is in fact the second to last of a big accumulation of poems that all keep hitting their heads against the wall trying to render and remember a Great Lakes bliss and abyss. And it promises/threatens and jokes/declares that there is yet more to be had. More of the same.

More sameness—of rendering; of unending shoreline, water, trees and woods; of scores of small Midwestern (and Ontarian) coast towns and not-town spaces to linger in, in-between. More homogeneity, more monotony, in all the driving and seeing and stopping and starting through all that sheer green, a hundred tones of green, with hardly any animals ever revealing themselves to break it.

Maybe more swimming to change things up, with all that water, more water always, not nearly so teeming with life as the ocean, but fresh open water for all to enjoy (except for some sick Lake Erie and inexplicable New York “No Swimming” beaches on Lake Ontario and Superior is freezing and Huron’s shallow and Michigan’s awfully all-American). But trust you, the region is in fact phenomenal, if you know how to make do, as we all need to learn to do, now. The poem is “On the water” and it is weirdly optimistic and might be the only one in the whole book that is, at long last, set on water, or about water, sort of—about to be looking back from that vantage.

You don’t like “water.” “Fuck water,” you want to try and say again, “I’m talking about the Lakes.” You’d gaily sheepishly blurted that out once mid-thought at a fancy fish dinner with your artist residency cohort of four as some very deep comments about water were starting to fly. Not conceptual—spiritual. Beyond getting tipsy on carafes of chardonnay and local pints, you were all getting buzzed on water.

The residency’s theme was water, right on marvelous Lake Superior. You don’t trust “water” but you feel a deep allegiance to the Great Lakes. They are what matters. Bodies and regions and earth matter. Water is matter. Water is not supernatural; it is fundamentally, supremely natural. But water is deified. Maybe that’s ancient. You want to believe, but. But what do you know? How many things is water? In a giant lake there. It is the giant lake there. One? That seems so sentient…

You feel water has become a fetish, as a concept. So elementally simple, so minimalist, it disappears behind itself, like air disappearing into thin air. Water on everyone’s tongues, making us salivate, wet. It makes you think cartoonishly of the gold rush. Water! Pure, clear water! Water fever. Everything these days seems gilded with water, everything it touches turns to gold. It’s a sacred hook—an existentially common denominator—the basis of everything, to build on together. You understand, but you’re deeply ambivalent about the abstraction of water. Water like a banner quivering in place, placeless. You fear placelessness. It’s why you are addicted to Google Maps. Isn’t everybody? Totalizing specificity, proper naming, sublime order, knowable space.

Yet, like many, you try and reject colonial hegemony. You can’t help but revere Indigeneity. But water flows one way at divides—you’re either duped by western science water as inanimate substance, or you’re co-opting animist beliefs about water. You don’t think of water as alive, nor of it as just a resource. Is there no other way? This is as transcendent as you can get:

Nature—the non-built environment, creatures—is a realm of supreme “otherness” with which we are already always in strange relation. We plead for communion with this nature; it cannot answer us; so we project that onto it, that feeling of harmony and oneness at a shore or a vista. We are both a part of that natural sphere and stand distinctly apart within it, in our creaturely and industrial/technological dominance over it. You are both part of that sphere, and stand painfully apart, with your consciousness, language, cumbersome car and computer.

This brings you to “On the water;” this is where the poem dwells. Trying to dream about water, or the opposite—sleep on water. A poem as oblivious as you could get to the complaints above. There are other poems in the book that are more critically, consciously, “ecopoetic.” When you were asked months ago to choose one and discuss your earth-centered poetics through it, a dozen others came to mind—poems that fessed up to climate change and sea-level rise and invasive species; that addressed the life of exurban animals or roadkill or, somehow similar, the one about what the book cover’s of—the gnarled dead tree hanging off a cliffside that you couldn’t stop from anthropomorphizing, like you can’t but read a billboard. “That obscure figure of nature”: something you wish you could write a whole philosophical treatise about. Instead of that, it was a poem of lovesick sublimity.

Instead of these, you chose the poem laced with technology in conceiving the abundance of the world—material excess and natural fecundity—one that finally naively embraces a vision of all of that together, problematics and all, after 83 pages of nature-wrestling and one page away from quitting words and turning back to experience, however mediated. A little poem filled to the brim with post-social justice, effortless consumption, extreme completeness, wire and power less and free, and wanting more, to overflow. A cybernetic second-person swimming you and the rest of humanity off into a brazen blue horizon; waterproof, I want to think.

Soliman says, “More homogeneity, more monotony, in all the driving and seeing and stopping and starting through all that sheer green, a hundred tones of green, with hardly any animals ever revealing themselves to break it.” Think about a commute you make regularly for work or leisure and write about the landscape you encounter. Is it “a hundred tones of green”? Are there animals? What’s missing? What’s present?
— Poetry Daily 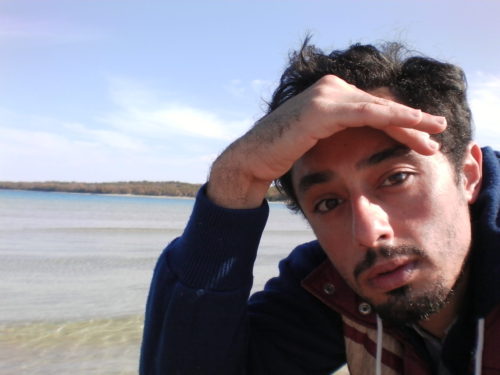 Moheb Soliman is an interdisciplinary poet from Egypt and the Midwest who’s presented work at literary, art, and public spaces in the US, Canada, and abroad with support from the Joyce Foundation, Pillsbury House, Banff Centre, Minnesota State Arts Board, and others. He has degrees from The New School for Social Research and the University of Toronto and lives in Minneapolis, Minnesota, where he was the program director for the Arab American lit and film organization Mizna before receiving a multi-year Tulsa Artist Fellowship. His debut poetry collection, HOMES (Coffee House Press, 2021), about nature, modernity, identity, and belonging through the site of the Great Lakes region, put him in Ecotone’s annual indie press shortlist and the Poets & Writers annual 10 debut poets feature. Moheb was a finalist for the Heartland Booksellers Awards and is a current finalist for the Minnesota Book Awards and Big Other Awards. www.mohebsoliman.info