Living and writing on the unceded Coast Salish territories, also known as Vancouver, for the past quarter of a century, I have a responsibility to this land and its peoples. My lifelong homework is to learn how respect is enacted and renewed with the Tsleil-Waututh, the Musqueam, the Squamish, for starters.

Recognizing whose homelands I am on, then, offers guidance on how to conduct myself as a woman of Chinese descent whose way, dao, must be reinvented in response to the times we are in. I begin by acknowledging how much I have learned from Tsleil-Waututh poets who, from Chief Dan George to Lee Maracle, have done their utmost to speak and write what needs to be said so as to create the conditions for a good relationship with the land and waters, and with each other. Lee reminds us that when we are on Salish territory, we are Salish citizens, even if we aren’t very good at it, even if we don’t realize it. Once we realize this, we can learn to become better relations.

Today, Chief Dan George’s descendants have formed the Tsleil-Waututh Sacred Trust to actively protect their home from colonial destruction through the proposed Kinder Morgan pipeline expansion. I consider the pipeline to be a lawless intrusion, and this expansion further violates Salish law. What skills or aptitudes do I have to offer in fulfilling my joyful responsibility to uphold Salish law? While there are many other ways, thankfully, writing is one way.

Writing saved my life, giving me a place to raise my voice, to not be wiped out or conscripted into someone else’s ideas or stereotypes of what I was supposed to be.

In the context of a colonized society that reduces freedom into superficial consumer choices or bluntly eliminates that freedom through systemic violence, writing can question unjust hierarchies and unthinking habits that need to be reconsidered. It can make space for the imagination to move swiftly as dragonflies at dusk, or as easily as otters floating affectionately together. It makes room for a world where every creature has a place, every life form matters.

My ancestors come from the Pearl River Delta in southern China, where they depended, generation after generation, on the land’s fertility for life. When my parents moved to Treaty 7 territory, Calgary, Alberta, Canada, where I was born, I inherited both their Chinese histories, as well as the responsibilities that come with living as an uninvited guest in someone else’s home. Whether or not those histories of Indigenous peoples were taught to me, they still apply.

Those of us living in cities rely too heavily on the sacrifices of Indigenous lands and waters up north, due to resource extraction that has severely damaged and polluted people’s homes, and reduced their ability to live with and from the land as they have for millennia. This sets up a relationship where we owe a debt to those whose homes have been destroyed or damaged for our urban lifestyles. Reciprocity is called for — it sings in our bones if we take the time to listen. We stop the pattern of colonial destruction by living more simply, more mindfully, by taking the power of the land’s words and Indigenous stories seriously. Writing, then, is what paradoxically returns me to land, to community. As the Unist’ot’en say, heal the land, heal the people (http://unistoten.camp/).

After opposing the Three Gorges Dam thirty years ago, I’ve entered another battle with so many others — paddlers, farmers, First Nations, citizens groups in B.C., Canada and the world — to stand with the Peace River, which is named after a historical peace agreement between the Cree and Dane-Zaa peoples. When I turn on the light switch at home, I imagine following the electricity lines all the way from Vancouver up the grid, a fourteen-hour drive north to the W.A.C. Bennett Dam on the Peace, built in the sixties, when it massively and traumatically flooded and displaced people and animals from their homes, poisoning the waters with methyl mercury releases. Being implicated in this brutal history every time I use electricity, I have a responsibility to prevent further violence. Poetry teaches, decade after decade, that actions follow words.

Talk of “reconciliation” is merely hollow rhetoric or cynical manipulation of traumatized peoples, unless actions back up the words: to not reinflict the violences of the past again today. The purpose of Canada’s residential schools, the Sixties Scoop, and today’s child apprehension agencies was/is to force Indigenous people off the land and keep them disconnected, disempowered, so that wealth could be extracted from their homelands. This is a colonial pattern that people around the world are all too familiar with, unfortunately. And it is a writer’s task to refuse to accept this unjust violent tearing away of people from their homes. It is a writer’s task to keep looking, speaking, singing, writing, remembering so as to change the field of what is possible, here and around the world we call home.

This is why I write: because this process of coming to language, to words, keeps alive a commitment to be in better relations with one another, to not merely absorb and repeat colonial violence unthinkingly, but to enact the kinship we are capable of, if we try, and to live better stories with each breath, each action, we offer the earth.

Adapted from “Who Will Wave Back? Notes Toward Why I Write,” by Rita Wong, published in the anthology Luminous Ink: Writers on Writing in Canada, Cormorant Books, 2018.

Wong writes, “Recognizing whose homelands I am on…offers guidance on how to conduct myself….” Research the colonial history where you live and learn about the Indigenous communities who originally resided there. If a poem emerges from your research, write it.
— Poetry Daily 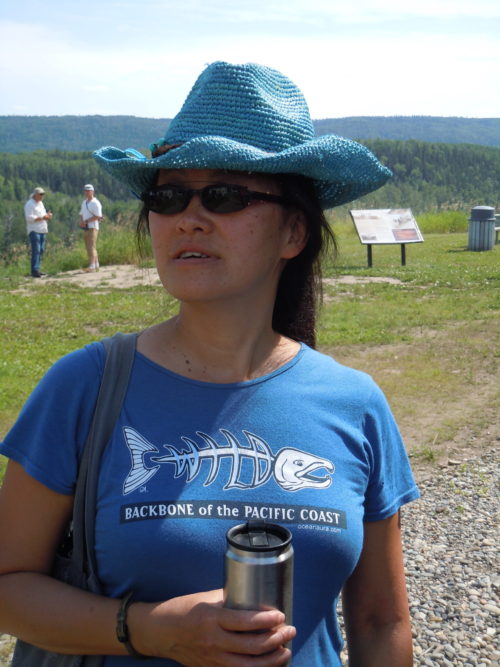 Rita Wong is a poet-scholar who attends to the relationships between water justice, ecology, and decolonization. She has co-edited an anthology with Dorothy Christian entitled Downstream: Reimagining Water, based on a gathering that brought together elders, artists, scientists, writers, scholars, students and activists around the urgent need to care for the waters that give us life. A recipient of the Dorothy Livesay Poetry Prize and the Asian Canadian Writers’ Workshop Emerging Writer Award, Wong is the author of current, climate (Wilfrid Laurier UP 2021), beholden (Talonbooks, 2018, with Fred Wah), undercurrent (Nightwood, 2015), perpetual (Nightwood, 2015, with Cindy Mochizuki), sybil unrest (Line Books, 2008, with Larissa Lai), forage (Nightwood, short-listed for the 2008 Asian American Literary Award for Poetry, winner of Canada Reads Poetry 2011), and monkeypuzzle (Press Gang, 1998). An Associate Professor in Critical and Cultural Studies at Emily Carr University of Art and Design, Wong has also served her faculty association as a steward and president.