In our occasional series, Building Community, we spotlight connections between our work on the page and our work in the community. In each issue, we pair a poem from our featured poet with an interview that explores what poetry brings to our neighborhoods, cities, and the wider world — and what community makes possible for poetry itself.

Rosemarie Dombrowski is the inaugural Poet Laureate of Phoenix, Arizona. Under a fellowship provided by the Academy of American Poets, Dombrowski has worked to make poetry more accessible to all Phoenicians through readings, writing workshops, and consistent engagement with lifelong learners. She is the founding editor of both rinky dink press (a publisher of micro-poetry) and The Revolution (Relaunch), as well as the founder of Revisionary Arts, a therapeutic poetry nonprofit.

This interview was conducted by Natalie Plahuta and has been edited for clarity.

Could you please describe the process through which you became Phoenix’s Poet Laureate, and could you express what the position means to you?

Well, it was an application process. A friend of mine was interning in the Office of Arts and Culture at the time, and he told me about it. I was hopeful that a low-level laureate position, like city laureate, would be accessible to someone like me. When I got the news that I had been selected, I was overcome with emotion. We had an inauguration ceremony the next week, and the mayor read one of my poems and introduced me; it was kind of like a surreal dream for me because I didn’t do an MFA program; I’m a PhD in American Literature with an emphasis on poetry.

What I realized in the first month of the laureateship was that I was going to have so many opportunities to talk, to teach, to facilitate workshops, and to give lectures in the community, opportunities that would never have been available to me otherwise. I wanted to prove to people that there was a body of poetry, not just a poem in the canon, but a whole body of poetry out there waiting for them; it was speaking to them and was, in a sense, modeling how they could tell their own stories. That’s been the most rewarding part by far.

My heart is in the community, and my heart is especially with lifelong learners. It’s especially important for me to make sure that older men in our community are afforded the opportunity to share their emotions and share their vulnerability in that way. I think that’s how we start to dismantle the patriarchy. I don’t think that a violent overthrow is ever going to work. I think it’s really about nurturing the men in our community of all ages and all races. I think there’s a place for radical action, but there’s also a place for radical love.

It sounds like the laureateship has provided you with a lot of great opportunities. I know that the Phoenix Poetry Walk was one of your goals as poet laureate; were you still able to carry that out during the COVID-19 pandemic?

This year, my press, rinky dink press, hosted what we called Microfest 2021, and we did 30-minute live readings featuring five rinky dink poets every Monday and advertised them as “micropoetry Mondays”.

I’ll probably put most of my energy into my nonprofit, Revisionary Arts. We provide and facilitate therapeutic poetry workshops to vulnerable populations. We work with a number of partner organizations and we also have monthly workshops that are open to the community. Instead of doing one-time events, we’re creating sustainable programming for different populations. All of our workshops are tailored to the population that we’re working with at the time, so it’s not only sustainable programming, but also population-specific programming. It’s educational. It’s conversational. It’s dialectical. It’s empowering. And it uses poetry as the vehicle for all of that.

Would you like to provide a brief definition of therapeutic poetry for some of our readers who aren’t familiar with the topic or with the medical humanities in general?

We like to think of therapeutic poetry as a space in which we can celebrate human vulnerabilities. More specifically, we read and discuss a poem — for instance, one that may help participants process grief or loss — and then engage in a writing and sharing exercise that’s typically modeled after the poem that we discussed.

This isn’t a 21st century phenomenon. It has existed for hundreds of years, and it actually got its start at the first hospital in the U.S. in the 18th century. It was founded by Benjamin Franklin. Benjamin Franklin, for people who don’t know, was a bibliophile, and he incorporated reading, music, and poetry into the therapeutic regimen for all the patients at the hospital. Then, he hired Dr. Benjamin Rush, who we now consider to be the father of American psychiatry, to work with patients in the psychiatric wing, and Rush had those patients not only writing poetry to help process some of their traumas and their depression, but he also had them self-publish their poetry in a publication called the Illuminator, the first mental health poetry zine.

In the early 20th century, poetry therapy was resuscitated in New York, and out of that resuscitation, the Association for Poetry Therapy was born, so there have been so many wonderful iterations, and eventually, some of those iterations moved out west.

Why were you so eager to pursue such interdisciplinary connections? What originally attracted you to the medical humanities?

I started writing poetry as a means of survival almost 20 years ago, shortly after my son was born with a trifecta of congenital heart defects and diagnosed with nonverbal Autism. I spent a good portion of graduate school attending biomedical conferences, reading the latest studies, and taking my son to see every specialist and therapist in the valley. I was aware of the fact that I was lyrically recreating/giving life to the culture of nonverbal autism, though I never really considered my work to be part of a larger mission. It was simply a means of survival.

After years of collating these medical poems, The Book of Emergencies was published by a small press (Five Oaks), and almost as soon as I started giving readings, I started talking about a phenomenon that I referred to as the “medicalization of poetry.” I also started framing my work within the “medical lineage” of Donald Hall and Jane Kenyon, the Confessional School, and especially contemporary poet-physicians like Rafael Campo.

My work in medical poetry soon evolved into my work in the medical humanities. I began reading about the techniques and modalities of therapeutic poetry, and, soon after, I was conducting workshops in the community, developing a course called Poetry & Medicine, and eventually, I formed my therapeutic poetry nonprofit, Revisionary Arts.

On a similar note, can you talk about The Revolution (Relaunch)?

The Revolution is another pet project of mine. We’re essentially a social justice, fourth-wave feminist, community-oriented publication.

I think a lot of my ideological values come from the suffrage movement. When I was a kid, my father gave me this Susan B. Anthony silver dollar minted in 1979, so it’s always been on my mind that I owe these women something and that I owe all of the feminists from all of the waves something, and that’s what being a zine scholar allows me to do. It allows me to focus on the publications that were marginalized and are now understudied and underrepresented in the canon, and it allows me to celebrate their work because I feel indebted to them. I feel like not celebrating and not continuing the work that they began and essentially sacrificed their lives for is somehow grossly disrespectful and ungrateful. 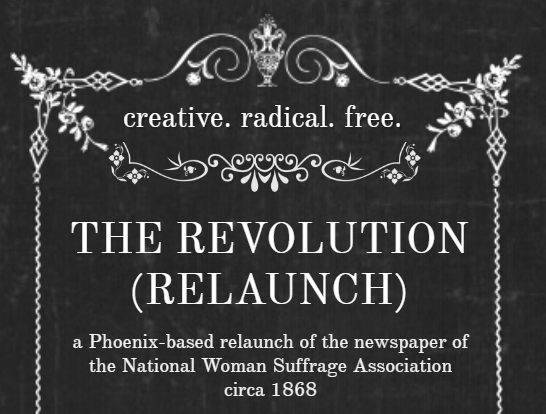 Of course, there were really powerful Black branches of the suffrage movement as well, and I’ve already made an Ida B. Wells micro-zine. Ida B. Wells didn’t have her own newspaper, but she was churning out publications that were very powerful at the time, and she was illuminating this shrouded subject of racism that no one was really writing about at the time. I feel equally indebted to her for being a realist writer, for being an observer of cultural atrocities, and for taking the great risks that she took to write about them in the midst of death threats.

For anyone who is a young aspiring poet, let your voice evolve. No matter how good you feel about your voice right now, no matter how strong you think it is, you can’t really be a socially conscious artist, or even a self-aware artist, if you don’t allow for multiple iterations of this voice over your lifetime. I think that you’re going to be impacted by your emotional health, your physical health, and the health of your community, city, and environment.

For the general public, poetry is like street art; poetry tells stories. It tells cultural stories. It’s a means of individual and communal empowerment. It’s filled with vitality, color, and life, as well as all of the complexity and richness of murals that represent life in any city or any community. That’s what a poem is. It’s not intimidating—it’s just about exposure. I don’t think that American society has valued poetry as much as it has other art forms because it hasn’t been in people’s lives as much as other art forms, and that’s okay, as long as we’re doing something about it.

Natalie Plahuta is in her second year of pursuing her MFA in Creative Nonfiction at George Mason University. She recently graduated with her Bachelor’s in English and a minor in Asian Studies from UNC-Chapel Hill.

Dombrowski serves as Poet Laureate of Phoenix. Write a poem inspired by the city in which you live. 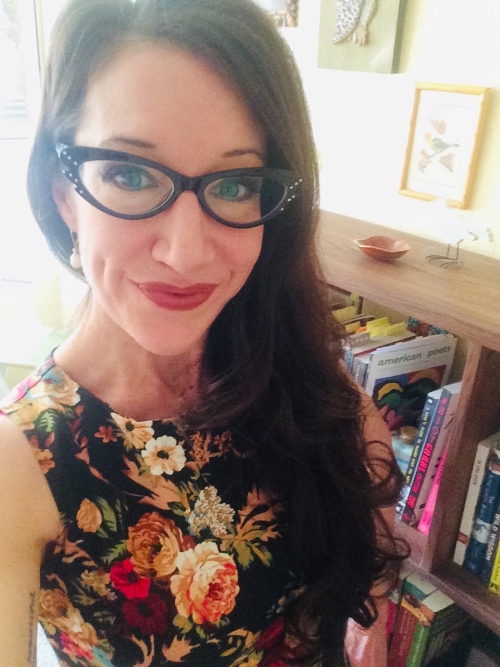 Rosemarie Dombrowski is the inaugural Poet Laureate of Phoenix, AZ and the founding editor of both rinky dink press (a publisher of micro-poetry) and The Revolution (Relaunch), an award-winning, creative resurgence of the official newspaper of the National Woman’s Suffrage Association. She’s published three collections of poetry including The Cleavage Planes of Southwest Minerals [A Love Story], winner of the 2017 Split Rock Review chapbook competition. She’s the recipient of an Arts Hero Award, a Women in Philanthropy Grant, and Fellowships from the Lincoln Center for Applied Ethics and the Academy of American Poets. In 2020, she founded Revisionary Arts, a therapeutic poetry nonprofit. She teaches courses on literature of the marginalized and medical poetry at Arizona State University. www.rdpoet.com