When did you—when does anyone—start writing poetry; or, when would you call the things, the scribbles, the utterances that you make or break, “poetry?”

When they are very young, a lot of people make up rhymes, or become attached to reciting mundane or magical-seeming phrases. Children may take pleasure in exclamations, swear words, and other fragments collaged from the grown-up world of overheard speech. If those contain the early sparks of poetry, for many Caribbean readers Martin Carter is a contributor to the flame. He is canonical in the region. He is one of those who comes into the world of the imagination so soon—who can remember whether they first heard someone read out his verses or first puzzled them out for themselves on a scantly-printed page?

“This Is The Dark Time My Love” consists of three stanzas in plain language. The speaker is at the same time powerfully loving and intensely helpless, unable to save the beloved addressee from the “man of death” who aims even at sleep and dreams. What a predicament: this poem which, from its looks, is all set to behave like a pure lyric, must instead record both war and nature, steel boot, and slender grass. In 1953, a year before Martin Carter’s poem was published in Poems of Resistance, the writer himself was arrested. The British responded forcefully to the free and legal election of a government of which they did not approve in their then colony of “British Guiana.”  Carter’s work is emotionally revolutionary. Its moving detail and shapely music insist on empathy and formal poise in the face of a destructive, would-be overwhelming force.

How to locate the sense of a poetic beginning in an encounter with something like this? Perhaps it is already at home. Unusually for published literature in my 1970s childhood, this Guyanese poem seemed to be about somewhere resembling home; resembling Trinidad. Brown beetles crawl about: yes, those entered the house looking for water, hard-backed critters which set the teeth on edge deliciously when encouraged to run over hands. (Did they know they were taking part in a game?) Red flowers: flamboyant, tulip tree, hibiscus, bougainvillea, ixora, roses, begonia, salvia…yes, there were a lot of those. (What did they have to do with “sorrow?”) Carter’s apparently simple descriptions quickly become troubled and troubling. Perhaps the poem was not only about what it seemed to be about.

Yet that poetic beginning and encounter with Carter was not the only beginning and encounter. How does it work, to start writing poetry? Isn’t the process start-stop-start by nature? You may stop in childhood and start again as an adolescent; start, stop, start at any time. Like falling in love, there is another “first” time, and—lightning flash—another.

After five years of ignoring poetry, in my late teens I started writing what seemed to me like real poetry! at last! Then life went on pause. There was an insurrection. An explosion shook the house. Heavy boots pounded up and down the street. For a few days, we were under twenty-four-hour curfew. This was the season to pick up Martin Carter once more: a dark time. He sounded different. So his brown beetles, armoured, scurrying, subject to greater environmental hazards than they could see in their game, those beetles were not beetles. Nor were red flowers only flowers. They would spring and spring. Sorrow does, and fire and blood, and struggle…

Who is Martin Carter? The oceanic Barbadian poet Kamau Brathwaite was rightly furious to be asked this question as a matter of information, back in 1976, the year before the publication of Carter’s Poems of Succession, but already a generation since Carter’s poetry was out and doing in the world.

But who is Martin Carter as a matter of inspiration, now? He is one of those poets you turn to throughout a lifetime. Watch the ruptures in experience he writes about. Feel anew the ruptures in your experience. Re-begin the process of poetry. Each time is another first.

Read Carter’s poem before you sleep or while you take a rest break (the hour on the clock does not matter), paying special attention to the phrase “my love.” When you wake, or in a later rest break, write (without thinking too much about it) a short response, no longer than Carter’s own poem, as if you were the beloved. Do this as often as you can, during two weeks. Then discard your drafts without reading them over. Write an entirely new poem about a personal or political crisis in your life. 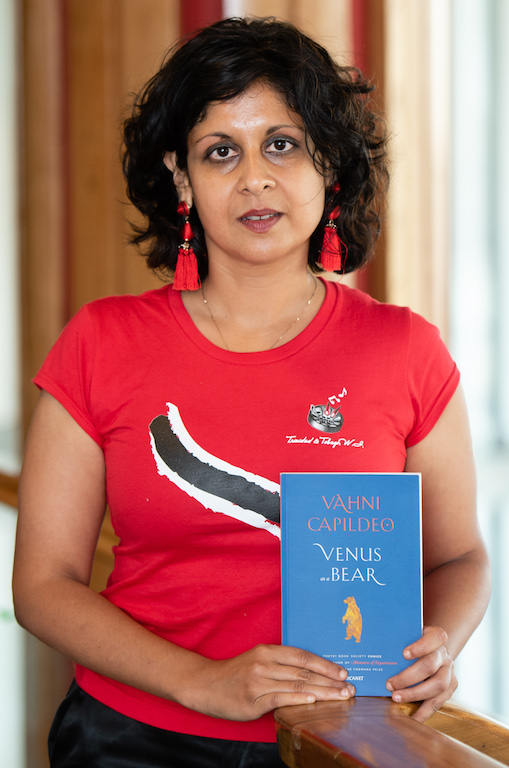 Vahni Capildeo FRSL is a Trinidadian Scottish writer whose seven books and four pamphlets extend from prose poetry into immersive theatre. Their work has been recognized by honours such as the Forward Poetry Prize for Best Collection for Measures of Expatriation (Carcanet, 2016) and the Society of Authors’ Cholmondeley Award. Forthcoming work includes Odyssey Calling (Sad Press, autumn 2019) and a book of essays.