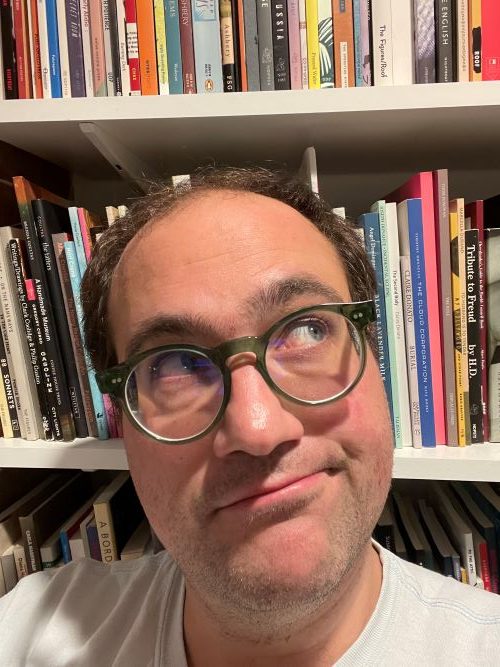 Ian Dreiblatt is a poet, translator, and soup-season enthusiast living in Brooklyn. His book forget thee is available from Ugly Duckling Presse, and his translation of Dmitrii Furman’s Imitation Democracy is forthcoming from Verso Books next month. He loves your outfit. 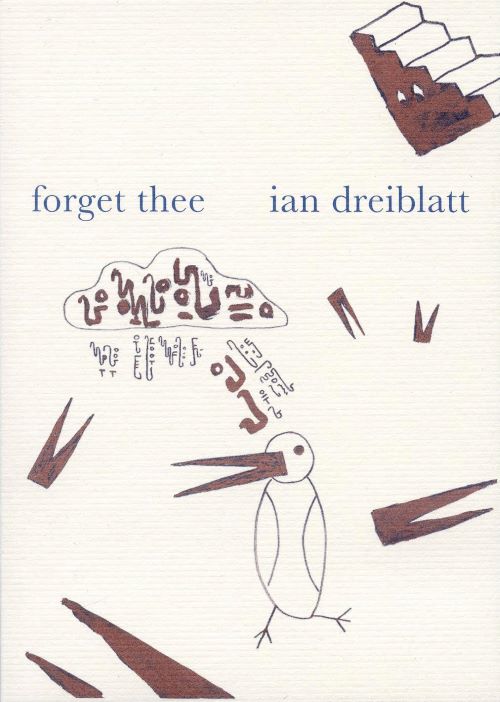 "Ian Dreiblatt resurrects the A-listers from antiquities, tourguiding them through our bullshit screenjobs, our michael jacksons and billy joels, our hamburgers and dick-shaped skyscrapers ('but we don’t love / to talk about that') and proves, à la Us Weekly, that the celebrities are Just Like Us exclamation point. In these dialogues with the ancients, Dreiblatt reveals that we are as much gourmands of power, as lost and as found, as much within savage and mystic religion, and as bewildered by meaning as it always seemed we were. forget thee is a song of brilliant punchlines bereft or assumptive of set-ups. The jokes themselves play at milling about, but at the poet’s hidden signal, stand at aimed attention, a protesting crowd before us, now suddenly belting out the anthem of our apocalyptic century — a choir of a thousand angel-jokesters reminding you to 'treat every earthling as an invitation to gentleness.'"
— Eugene Lim

"There is a line at the very start of Ian Dreiblatt’s forget thee that circles in my mind throughout the collection—humming with the lingering question: 'well what are saints for if not to break the distance between the things around us and the words we use?' It sumptuously carries the collection forward, starting from page one, all the way to the end. I am interested in how the hinges meet in Dreiblatt’s work and the condition of the hinges—the ancient world and the present moment are equally alive and vivid and they meet as bedfellows here. Dreiblatt lets them meet but ultimately takes a chisel to it all. He doesn’t do this for the sake of destruction—he does it to see what he can excavate. He shows us the ruins so we see where the new hinges could be. In forget thee, we forget time, we forget what constitutes vernacular, forget what is staid—we go past it all. Then, we can take a portion of everything and 'break the distance between the things.' Maybe in time we would see where it folds, loops, luxuriates, and bleeds. A ‘possible next’ at end times is laid bare in this chilling and tender and radiant collection."
— Asiya Wadud

"Despite the fact that it is 2020, and nearly 2021 when I write this, I want to remember Ian Dreiblatt’s forget thee as one of the great poetry books of the (post-) Occupy era. It arrives as an untimely meditation upon the long 2010’s, a speculative, elegiac lyric of hope without hoping, clear-sighted and hearted intellectual pessimism amidst an attenuated collective optimistic will. In the first and last poems of the book I am transported to many conversations regarding (political) friendship after [Frank] O’Hara. To what extent can our most intimate relationships prefigure unacknowledged worlds and worlds of the unacknowledged despite their mediation by the commodity form (and social media specifically as an apotheosis of the commodity form)? And to what extent is a commons salvageable from the unfathomable wreckage of advanced racial capitalism? Assuming a choral mode, Ian forces us to consider a tenuous ‘we’ again despite the wreckage piling exponentially at our feet and the profound disparities concerning whom the disaster most affects. Employing interlocutors from antiquity throughout many of the poems—among them gods, poets, and ancient sovereigns—the task of the consummate translator-poet has never been more urgent, and ludic. Through his interviews with them he clears a space for critique and speculation, but also for a kind of lyric rarely heard nowadays. That specifically of thought’s fugitivity, its delightful fleeing from sense, and of the words of countless others—another mode of chorus—breathtakingly and breathlessly interwoven."
— Thom Donovan