How to Love This World

This essay was translated into English by Robin Myers. Read the original Spanish text here.

I write these words a few days after an expedition to Volcán Wolf on Isabela Island—the largest island of the Galápagos—located thirty giant tortoises of two species, Floreana and Pinta, that were believed to be extinct. Among them is a distant relative of Lonesome George, who died in 2012, leaving no offspring, and whose embalmed body I saw a couple of years later in the American Museum of Natural History, in New York.

This beautiful, atrocious, immeasurable planet works more or less like this: species appear and disappear every day in a dance that human beings—despite all the scientific progress and tools at our disposal—are unable to understand. It’s surprising, given this titanic ignorance, that we inhabit the world as if it were made for us, heirs to an anthropocentric vision established by Aristotle when he placed us atop the great chain of being. We act as if animals were ours to use at our convenience: we capture them for our entertainment in zoos, we torture them until they learn to leap through flaming hoops in circuses, we build industrial slaughterhouses to murder them more efficiently and package their flesh for sale.

Montaigne based his praise of animals, developed in his “Apology for Raymund Sebond,” in a radical skepticism toward human superiority: “Can anything be imagined to be so ridiculous that this miserable and wretched creature, who is not so much master of himself, but subject to the injuries of all things, should call himself master and emperor of the world?” Viewing animals as inferior to us, says Montaigne, and I agree, isn’t simply cruel. It’s absurd.

With these ideas in mind, I wrote the book Una ballena es un país (translated as A Whale Is a Country by Robin Myers), in an attempt to say what the language of the academy and the language of activism hadn’t allowed me to say. I was especially interested in questioning our bonds with animals and the beliefs that uphold them, so as to build bridges of empathy in a way that only literature can do. By making liberal use of materials and literary devices that may initially seem incompatible, I conceived this book as an invitation to challenge the boundaries between fiction and reality, between poetry and essays and stories, between the role we think we play on this planet and the role that climate crisis and the sixth mass extinction demand we take up.

In order to understand that all living beings are alike, no matter how dissimilar we may seem, we must transform our relationship with nature and assume a new stance; we must situate ourselves neither above nor below the other creatures on Earth, but beside them. Sometimes, when I need a break from the horrors of the news and from the general pessimism they provoke, I think about how there are still lions roaming the African savannah, water bears dozing peacefully in the moss that covers the entire world, and whales inventing songs that will never reach our ears. By the time I finish writing this paragraph, a cuttlefish in the depths of Jervis Bay will have changed shape, texture, color; the sewers of Mexico City, New York, and Paris will still teem with rats who love pizza and are capable of remembering acts of kindness; thousands of starlings will have traveled the skies in murmurs that make them look like a single coordinated organism. It gives me great peace to think about everything that happens beyond the human gaze, and, in a sense, in spite of it.

The US poet Mary Oliver, to whom this book owes so much, wonders over and over again how to live. She taught me to observe the things around us without trying to touch them, and that we don’t need to own what we love. That we’re all a little wild sometimes. That I don’t need to be good, just to let the soft animal of my body love what it loves. That swans know more about life than we do, that we should listen to flowers when they speak, and that rivers are important because we find company in them. That if I suddenly and unexpectedly feel joy, it’s my duty to shake off my fear and give in to it. And that in the end—truly in the end—life is about one thing only: how to love this world. If this book manages to express any of that, I’ll be satisfied.

Robin Myers is a Mexico City-based poet and Spanish-to-English translator. Book-length translations include Another Life by Daniel Lipara (2021), The Science of Departures by Adalber Salas Hernández (2021), Cars on Fire by Mónica Ramón Ríos (2020), The Restless Dead by Cristina Rivera Garza (2020), and Animals at the End of the World by Gloria Susana Esquivel (2020). Other translations have appeared in Granta, The Baffler, Kenyon Review, The Common, Harvard Review, Two Lines, Waxwing, Asymptote, Los Angeles Review of Books, and elsewhere. She was among the winners of the 2019 Poems in Translation Contest (Words Without Borders / Academy of American Poets). As a poet, Robin’s work has been selected for the 2022 Best American Poetry anthology and appears in journals such as the Yale Review, Denver Quarterly, Poetry Northwest, Annulet Poetry Journal, and Massachusetts Review, among others. Her collections have been published as bilingual English-Spanish editions in Mexico, Argentina, Chile, and Spain. She is an alumna of the Vermont Studio Center, the Banff Literary Translation Centre, the Community of Writers, and Under the Volcano. She is represented by the Willenfield Literary Agency.

Zapata says, “Viewing animals as inferior to us…isn’t simply cruel. It’s absurd.” With this in mind, write a poem from the point of view of an animal. (Perhaps an animal examining human behavior?)
— Poetry Daily 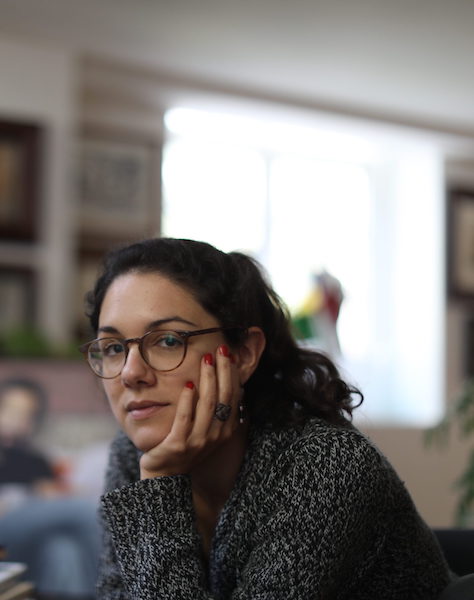 Isabel Zapata (Mexico City, 1984) is a writer, translator, and editor. She is the author of Las noches son así, Alberca vacía Una ballena es un país, and In vitro. Her critical and creative work has appeared in Periódico de Poesía (UNAM), Letras Libres, Este País, The Common, Waxwing, and World Literature Today, among others. In 2015, she and four friends founded the press Ediciones Antílope.