The twenty-eight six-line stanzas of “The Moose” scroll out like the rural highway the bus must have traveled from Nova Scotia to Boston. The poem’s first sentence stretches for six full stanzas as it follows the bus’s journey past the bay, the river, small towns, stands of trees, and open countryside to the farm house where it picks up a “lone traveler.” In the next two lines, the traveler bids farewell to her relatives and their dog. Then there is this short matter-of-fact sentence: “The bus starts.” The rest of the poem keeps up the pace established by this opening—long descriptive sentences interrupted occasionally by short declarative sentences and fragments—exactly how a bus would move through small towns and rural areas at night.

“The Moose” is based on the bus ride Bishop took in 1946 when she was staying with her relatives in Nova Scotia (one of them is her aunt, Grace Bulmer Bowers, to whom the poem is dedicated) and had to travel to Boston on business. The lone traveler is Bishop; the collie and the moose mentioned in the poem appear in the letter she wrote to Marianne Moore about the trip. Bishop worked on the poem off and on for the next twenty-five years and finally finished it in 1972, when she was living in Cambridge and teaching at Harvard. I learned these facts from Brett C. Miller’s critical biography, Elizabeth Bishop: Life and the Memory of It, which I read shortly after its publication in 1993, in order to teach a seminar on Bishop’s poetry at the small Catholic College in Green Bay where I was the only creative writer on the faculty.

Teaching this poem nearly 50 years after the bus ride that inspired it and more than a thousand miles away from the landscape it depicts, I was amazed by how it resonated with my experience of the small towns and rural areas of the Midwest. In the middle of the poem’s journey is an “old conversation” that is overheard or, more likely, imagined (it’s described as “a dreamy divagation” and “a gentle, auditory, slow hallucination”). The conversation presents a communal portrait of people getting pensioned, widowed, remarried; some dying young in shipwreck or childbirth, others taking to drink, still others succumbing to mental illness; everyone being born and then eventually dying. The meandering recitation of tragedy is met with one word, “Yes,” uttered with an indrawn breath, no discussion or commentary necessary because life just is. This was precisely how people talked in small towns in the Midwest in the 1980s and 1990s when I lived there—we didn’t confide in each other about our sorrows or fears but recounted other people’s troubles as parables of our own, wanting nothing in return except a simple acknowledgment that life was strange and, sometimes, hard.

The moose appears out of the “impenetrable wood” to interrupt this communal reverie. For a few lines, the animal seems dangerous or confrontational, towering over the bus and sniffing its engine. But it’s also homely and “safe as houses,” and in its presence, passengers can only utter trite remarks about its size, appearance, and gender. Their nearly inarticulate observations are counterparts, I think, of the indrawn “Yes.” In the face of tragedy or wonder, our words fail. What is tragic is mundane, and what is magical is plain. That, too, felt real to me. The wildlife I encountered on my drives and walks in rural Wisconsin thrilled me more in recollection than in the actual moment, when I seemed to be noticing all the wrong details: the black bear I had to brake for on a county highway (“What a big dog; oh, that’s not a dog,” I thought as my car stopped ten feet away from the bear, who loped into the line of trees on the edge of the road), a flock of short-eared owls roosting at a Christmas tree farm, silent and immobile in broad daylight like macabre tree top ornaments. Come nightfall, they’d be chasing and devouring the voles foraging at the trees’ roots. Nature isn’t pretty—and neither is civilization. The moose on a moonlit macadam is a real animal who leaves its animal smell to mix with the harsh smell of the gasoline that fueled the journey.

The bus ride in the poem seems timeless in the way of an allegory or a parable, partly because travel is a metaphor we all recognize but also because the poem uses a perspective that is intermittently omniscient. The long opening sentence describes the bus from the outside as it travels toward the setting sun with its “windshield flashing pink”—not as the passengers inside, or the lone traveler waiting some miles away, could have seen it. Bishop doesn’t tell us that the lone traveler is herself, though six stanzas later, when another passenger, an elderly woman with market bags, gets on, the poem employs the pronoun us for the first time (“She regards us amicably”), so whoever the speaker is, it’s someone who was already on the bus. Although Bishop doesn’t use either we or I during the “dreamy divagation,” the hallucination or the memory feels communal as well as personal, and at the end “we all” experience the joy of seeing the moose. I love the way Bishop manages to be personal without the first-person-singular and universal while portraying a handful of people traveling through rural areas that most of her readers might dismiss as unimportant.

The year I taught the seminar on Bishop’s poetry, I still believed I would spend my whole adulthood in Wisconsin. I had no idea that by the end of the decade, I’d grow restless, give up my tenured teaching position for a five-year lectureship at Harvard, and move to an apartment in Cambridge, just a mile from 60 Brattle Street where Bishop had lived. Or that, fifteen years after my term there ended, I’d be teaching in Northern Virginia, living in Washington DC during a global pandemic that put a stop to every trip I was planning in the foreseeable future, and thinking about several long-ago bus rides — Bishop’s actual ride in 1946, the one she recreated in her poem in 1972, the numerous Greyhound Bus rides from my college and graduate school years in the Midwest. Both in memory and in actuality, the bus forces us to travel slowly, in the company of total strangers who share something of our background or circumstance: they have a connection to the place we are traveling to or from; we all had a practical or not-so-practical reason to choose this mode of transportation over any other. Every bus journey is a form of time travel: a chance for memory and reflection.

Write about your own trip on a bus, or if you’ve never taken a long-distance bus ride, then on another relatively slow vehicle such as the train, the car, or the bicycle.  Whether you write in prose or poetry, you can try to recreate the rhythm and pace of the particular journey, the way Bishop does.  Build your poem, story, or essay toward a surprising encounter, if not with wildlife, then perhaps with a person or a place.  You can take a detour into the past or to a timeless place as Bishop does through the overheard, imagined, or remembered conversations of her (or all of our) grandparents, but toward the end, something should jolt you back to the “present” journey.  Safe—and happy—travels! 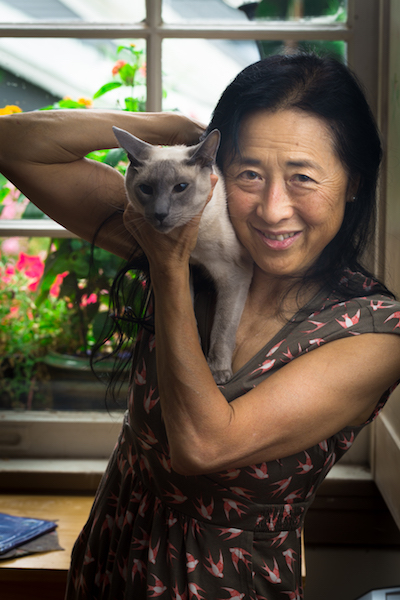 Kyoko Mori is the author of three nonfiction books (The Dream of Water; Polite Lies; Yarn) and four novels (Shizuko’s Daughter; One Bird; Stone Field, True Arrow; Barn Cat). Her essays and stories have appeared in The Best American Essays, Harvard Review, The American Scholar, Colorado Review, Conjunctions, and others. She teaches nonfiction-writing in the MFA Program in Creative Writing at George Mason University and the Low-Residency MFA Program at Lesley University. Kyoko lives in Washington, DC with her cats, Miles and Jackson.