Shara Lessley on Li-Young Lee’s “My Father, in Heaven, Is Reading Out Loud”

In 2000, I left my home state of California; left the rhythm of the dancer’s daily practice—morning class, conditioning, afternoon and evening rehearsals—left all of it in pursuit of another art form altogether. Saddled with chronic hip injuries and noxious perfectionism, I was ready, I thought, to make a break. Start fresh. Reinvent. “A dancer dies twice,” theorized Martha Graham, “once when they stop dancing, and this first death is the more painful.” Perhaps, then, persistent (albeit unacknowledged) grief is why—to defray the cost of tuition—instead of applying as a teaching or research assistant at the university where I’d enrolled as a graduate student in Creative Writing, I took a job as a live-in dorm mother at Washington D.C.’s Kirov Academy of Ballet.

Eager as I was to transition from performer to writer, I remained comforted by ballet’s discipline: its language, physicality, and line-making. Nights off—the Kirov trainees fast asleep—I’d often sneak downstairs to give myself barre in the remote corner of a studio that the building’s security cameras couldn’t reach. The room that hour was dim and cold; the piano, at rest under a quilted cover. Lonely and filled with uncertainty, I’d work the usual positions, moving from pliés through grand battements before heading center. Sometimes, I carried books in my dance bag to thumb through while stretching. In these pages, I discovered “My Father, in Heaven, Is Reading Out Loud.”

Like the father in Li-Young Lee’s poem, I’d arrived at a threshold—one I wasn’t sure I had courage to cross. Whether pacing the Kirov’s long halls or roaming the sprawling campus at University of Maryland en route to the MFA workshop, I, too, walked “…grave, / determined,” “…my life now mov[ing] / with a powerful back-and-forth rhythm.” Maybe this was because, like Lee’s speaker, I was drifting between nostalgia and speculation: mourning the art to which I’d been committed for most of my life while, at the same time, relishing new challenges and pleasures via writing—ones I’d never experienced on stage.

I don’t mean to align my inner conflict too directly with the figures in the poem; at twenty-five, my private crisis of self was far from life-or-death matters of political persecution and forced exile. Nor was my sense of loss in any way approximate to the longing Lee’s speaker feels as an adult son. Still, as in “My Father, in Heaven…,” I pondered deeply what I read and looked for signs wherever I could find them. As the year progressed, the anxieties of powerlessness, of anticipation, narrowed: while the academy’s senior-most students waited to hear whether they’d secured apprenticeships or corps contracts at ABT or Boston or Joffrey (or would, as I had at seventeen, head off to a university Dance Department), I tried and failed, and tried again to find my metrical footing.

Because as a dancer I’d devoted myself to linearity—the ballets I grew up on were mostly narrative, and even the semi-abstract pieces I performed had clear emotional arcs (beginnings, middles, ends)—one of poetry’s first appeals was its ability to refute temporal order. Thinking back to that night in the studio reading “My Father, in Heaven…,” I remember being awed by the extent to which Lee resisted closure. Throughout its five stanzas, the poem collapses time; it resides in between-ness as the speaker’s father is both present and absent, empowered and helpless, bodied and transcendent, mythic and human, a believer in faith and fact. The writing, likewise, is a well of contradiction—its players at once curious, lost, attentive, fearful, tender, grief-stricken, steadfast, awkward, focused, confused, insightful, disappointed, powerless, patient. In other words, nuanced and beautifully human. The more I studied “My Father, in Heaven…,” the more I appreciated the stanzas’ complexity, pattern-making, and interiority, and how the poem reflected the lyric’s capacity as a communal art. I knew this is what I wanted. Whether I could write anything of dimension was uncertain. But in Lee’s work I discovered textures of energy, music, and intimacy I hoped to emulate—even if I couldn’t predict my effort’s outcome.

Did front desk security ever spot me in the lower studios, catch me in the blue glow of surveillance monitors as I balanced on half toe in sur le cou-de-pied or worked rond de jambe en l’air? If so, no one said a thing. It’s unlikely anyone knew I was there. Except the mirror, of course, which stretched the length of an entire wall, and—more often than not as the year marched forward—reflected back the shape of a young woman seated in a forward bend, reading while waiting “…as always someone / waits, far, near, here, hereafter, to find out: / is it praise or lament hidden in the next moment?”

Remember a time you (or someone you loved) faced a crisis or transition. Imagine yourself or the person of interest in a particular place—the booth at a roadside diner, an evening walk through an unfamiliar neighborhood, an upstairs office at a bank, the scene of an accident. Try to find details within this setting that suggest some contradiction of feeling, or send mixed messages about the future. (Consider the subtle tension between the Psalms vs. news in “My Father, in Heaven, Is Reading Out Loud,” for example, or the kind of guidance the speaker’s father seeks from God vs. a radio.) As you begin to write the poem, keep the central crisis hidden and focus instead on the mind as it works to navigate uncertainty. 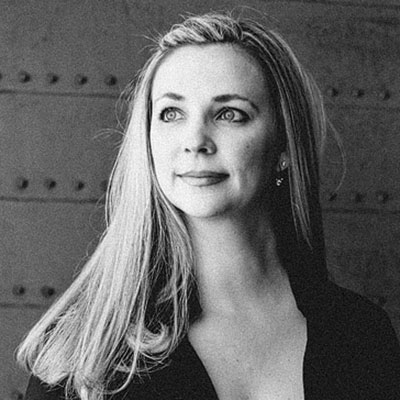 Shara Lessley is the author of The Explosive Expert’s Wife and Two-Headed Nightingale, and co-editor of The Poem’s Country: Place & Poetic Practice, a book of essays. A former Wallace Stegner Fellow in Poetry at Stanford, her awards include a National Endowment for the Arts Fellowship, the Mary Wood Fellowship from Washington College, the Diane Middlebrook Poetry Fellowship from the Wisconsin Institute for Creative Writing, an Olive B. O’Connor Fellowship from Colgate University, and a “Discovery”/The Nation prize, among others. Shara’s poems have appeared in American Poetry Review, Gettysburg Review, New England Review, 32 Poems, and the Best American Poetry 2020 and Pushcart Prize anthologies. Consulting Editor for Acre Books, she currently lives in Dubai.